Connor Donnelly and his brother Brendan have created a slick new retailing presence in the Rathkenny area, just under three miles from Ballymena.

Opened in May this year, Donnelly’s of Rathkenny is a plush convenience store, featuring a modern design with neutral shades and futuristic exterior.

The site also features a full forecourt, which is currently unbranded.

The aspect of the site certainly chimes with the ambition of Connor, whose enthusiasm for the store is clear during our interview.

That has made the work that has gone into creating this store a little easier although, according to Connor, much of the exterior work had already been done for them.

“It was a Peugeot car dealership and when it came up for sale we had the idea to put a shop in it,” Conor told Neighbourhood Retailer.

“Much of the exterior work already looked good, and we knew it was a sound building, so all we had to do was paint it and place the logo outside. The exterior was a lot more work, and we’re really happy with how it has turned out.”

The building’s location, on the corner of the Cushendall and Knockan Roads, just north of Ballymena, was a big attraction for Connor.

“I had an idea that it could work well as a petrol station, and as a place to stop for coffee,” he said. “The amount of land around it lent itself to creating outbuildings for more commercial units, so we decided to go for it.”

What the brothers have created is a solution-packed site with a huge amount of potential. 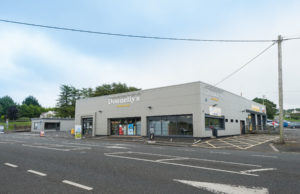 A joiner by trade, Connor said he along with one of the project’s main financiers – his mother – spent a lot of time researching the area and the retail business before deciding to pull the trigger on the site.

Meanwhile, his brother Brendan has a background in retail having worked as part of Tesco’s online team in Northern Ireland.

But they still decided to pull in some big guns for the project.

“We also spoke to Nisa and that really helped get the ball rolling,” he said. “It took a year to get the planning permission through, which was much slower than we had hoped.”

Connor explained Nisa had carried out a feasibility study on the site and what was striking about the results was the amount of passing traffic.

“There aren’t many homes nearby but there are over 4,000 cars passing that corner every day,” Connor said. “We knew then there was a space for a stand-alone shop.”

The opportunity was there, but why the move into retail in the first place?

“When the recession hit, it gave me the idea of opening a small shop,” Connor explained. “I loved the idea of doing my own thing and running my own business. I did a lot of work in shops and refurbs, but I realise that actually running a store is a completely different ball-game.”

So what experience does Connor, the business’s managing director, have of running a store?

“None!” he laughed. “But I’ve been asking plenty of questions and working closely with a number of people in the trade. I’ve spent a few days in other stores, getting a crash course in the business.

“Brendan has also been a big help, having been involved with Tesco.” 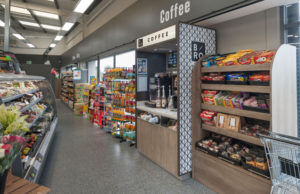 It may have been a crash course, but it’s clear Connor is a fast learner with the store packed with the latest concepts and modern approaches.

“The coffee is right at the front of the store, and leads to the deli. There’s a large café area where you can sit down and read the paper. We serve freshly-made good country food daily and have a large salad bar.

“We also do Sunday dinners, which are really popular – it’s all good quality food and we have a great team in at 6am every morning preparing the food until 2pm to 3pm. It’s going really well, and we’re looking to extend the hot food service into the evening.”

According to Connor, the reaction to the store has been “really positive” and the store’s future looks bright.

“We’re always thinking about a lot of other aspects we could bring into the store,” he said. “We’ve been speaking to a major fuel brand and we’re expecting to sign an agreement in the very near future.

“We’re hoping it’ll be branded by early September and that will add an extra element of professionalism to the site.

“We’re also planning to build a number of outbuildings, and rent them as commercial units to local businesses, making the site a real destination for local people.

“We want to have a site which provides a complete offer at this corner. This is a big, long-term project and we’re really delighted with how it’s going so far.” 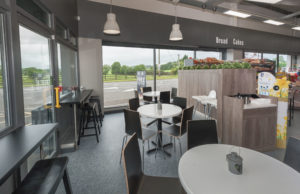