SuperValu Fruitfield in Richhill, and Lilley’s Centra Dublin Road in Enniskillen, were both honoured last night at the 2021 Retail Industry Awards, taking home the titles of Independent Retailer of the Year.

“I would like to congratulate both Philip Woods and his team at SuperValu Fruitfield, Richhill, and Una Lilley and her team at Centra Dublin Road, Enniskillen, who competed against some of the best stores in the UK, to achieve these awards. It is testament to the hard work that has been put in during what has been an incredibly difficult year, by staff at both a local and national level.

“Local has never been more important and both our SuperValu and Centra stores operate in the heart of communities across Northern Ireland. Offering our customers value, choice and high quality convenience continues to be our driving force and we are delighted that these stores have been recognised for the service they provide to their communities.”

Lusty’s Centra in Larne was also highly commended in the Drinks Retailer of the Year – Independent category for its extensive beers, wines and spirits offering. 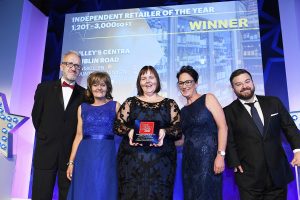