Christmas on the shopfloor

On the one hand, the spectre of Covid restrictions is rearing its head once again. But on the other hand, we could see a bumper Christmas as families stock up on the goodies and prepare for a festive period at home.

Last year saw shoppers spend an extra £100 million on alcohol in supermarkets in the run up to Christmas and grocers will be hoping for a similar bump this year. So what are our retailers seeing on the shopfloor? 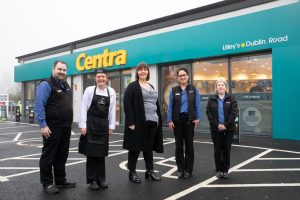 Retailer Una Lilley, who owns two Lilley’s Centra stores in Enniskillen, says customers have been stocking up early this year.

“I think people have started shopping early – we’re finding it busy,” she says.

“People have started earlier to get their bits and pieces together rather than leaving it all to the last minute.

“I’d expect it to be a busy Christmas, given that it looked like we were going to be able to meet up  again – but who knows?”

Sales are brisk when it comes to the usual store cupboard goodies with longer shelf lives, she says.

“It’s the usual stuff – chocolate, confectionery, tins of biscuits and all that sort of stuff that people are buying early,” she says.

“We have weekly offers and that’s probably driving a bit of footfall across the site – things like Shloer, all the usual stuff that people like to buy at Christmas.” 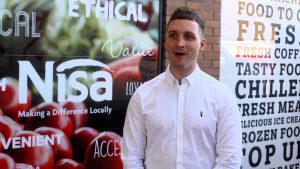 “It’s been busy and things are getting busier, with stock issues and Covid. People are getting sick and that have just exacerbated the pressures we already face at this time of the year,” he says.

James admits it has been difficult to find enough staff to work in the shop.

While the Christmas stock has been on the shelves for a while, it’s only now that people are really getting going on the festive shopping, he says.

“This past weekend seems to have the start of it, from a Post Office point of view with Christmas cards and things,” he says.

Oonagh Heatley of Kearney’s Costcutters in Randalstown says business has been brisk.

We’ve had a lot of people isolating again in the local area so we’re doing a lot of deliveries. But we can’t complain,” she says.

“It’s probably more everyday shopping – we wouldn’t have seen a big uplift in the Christmas stuff yet, although we are starting to get it now, things like selection boxes and things like that.”

Oonagh says they are seeing staffing issues at the moment.

“We normally do a customer giveaway where we give out food and mulled wine, but we didn’t do it last year and this year,” she says.

“But we may possibly do a Christmas draw for a hamper in the run-up to Christmas – a 12 days of Christmas hamper a day offer with random selections.”

“We’ve just got stock in and we’re putting in the Christmas pricing for a lot of the deals that we’re getting organised with. There’s a lot of preparation involved,” he says.

“Christmas stock was already in store a while ago, but it’s making room for everything.

“We’re always busy but we are busier than we normally are, with seasonal things, like tins of sweets and drinks promotions.”

The store is busy sourcing stock and putting promotions in place to attract shoppers in, he says.

“The big companies are pushing very hard on these and we’re seeing that in the press, so we’re trying to get the deals in place that will keep us competitive. When it comes to Christmas, December really is the time for selling – tins of biscuits and we’ve got a few wine deals going well.

“We’re putting it on early to make sure there are plenty of deals to be had and they are visible.”

While a few staff members had to isolate, they’re back at work now, he says.

“I’ve heard horror stories about  companies having a tonne of people off. And it’s not just as easy to get people as it once was, but it’s not something we’re worried about.

“Thanks to the cold weather, coal and sticks and all that stuff has been selling well over the last few weeks since the weather turned.” 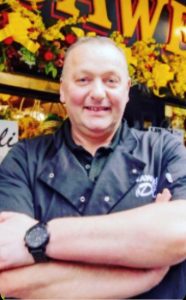 “I think it’s because we are a more exclusive shop and people want their niceties for Christmas, so we are very busy – we’re a sort of specialised market,” he says.

“The hampers are the main thing, along with all the local things we do, and Sawers brands are all selling well.

“Everybody wants to buy local this year and we’re getting more jams, chutneys, pickles and biscuits that are produced by local suppliers and we have them branded for us.”

Kieran says the Christmas rush has come earlier this year and they have had to adapt.

“It’s been early – people have this fear of lockdown again and we’re seeing a different trend. Usually in October people are going around browsing, but this time they are browsing and buying, so we’ve had to up our orders.

“We’ve been onto more companies, trying to  up our orders to make sure we have enough.” 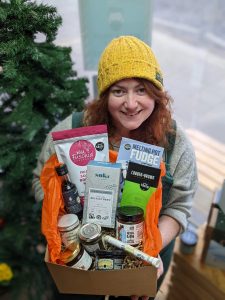 Laura Bradley, partner at Indie Fude in Comber and Belfast, says both shops have been busy, along with the online store and corporate hampers.

“Definitely, there is a good demand for local produce. I think people were burned last year because we had to close our books really early for hampers and even cheese boards, so this year they got in early to make sure they can get all those lovely things that they know are available locally but aren’t always in massive supply because they are from artisan producers,” she says.

“More and more businesses are acknowledging how important it is to get their hampers locally.

“I suppose because we really shout about how great our local cheese and charcuterie are, they are great sellers every year. 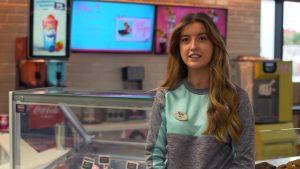 Emma Rice, marketing manager at Springisland Supermarket in Coalisland, admits the run-up to Christmas this year has been a challenge.

“Everyone’s anxious about the ongoing pandemic and potential lockdown, so we’ve found it’s definitely affected shopping habits and seen a lot of customers stocking up early on key lines,” she says.

“Trade has been great all year and we can see customers are keen to get organised so we opened our order books early this year to ensure customers weren’t disappointed.

“Amid the ongoing price increases apparent across the supply chain, this Christmas we’re focusing on maintaining competitive pricing on the Christmas dinner essentials alongside the introduction of new unique products to give customers the best experience we can.” 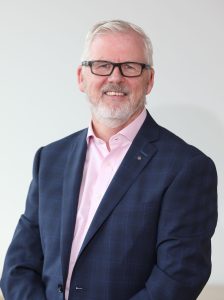 Paddy Doody, Sales and Marketing Director at Henderson Group which owns the SPAR, EUROSPAR and ViVO brands in Northern Ireland says the company introduced the annual 12 Deals of Christmas campaign back in October, giving shoppers the opportunity to stock up on a different everyday and festive essential at a reduced price each week, in the lead up to Christmas.

“We’ve had Shloer and tubs of sweets on offer, which are always popular for Christmas, alongside cocktail sausages and clementines, so shoppers have been taking advantage of those deals which helped them get organised early,” he says.

“As a local retailer, we’re proud to have local products on our shelves and for Christmas, 100% of our Christmas dinner products are from local farms, fields and suppliers such as Fresh Fields carrots, Stephen Murdoch and Andrew Herron’s Brussels sprouts in Comber, William Orr & Son’s potatoes in Crossgar and Cookstown Gammon.

“Keeping it local offers better value for our shoppers and continued support for our local suppliers and agri-food industry, so we’ll have everything our shoppers need for the big day.”

For full feature in our latest issue of Neighbourhood Retailer, click HERE.

Corries to launch new food hall in Cherryvalley this week