Christmas turkey prices up by almost a third

Prices for Christmas turkeys have soared by almost a third compared to last year, with frozen turkey prices up by 32%.

Data compiled by Assosia looked at eight of the UK’s main supermarkets – Tesco, Sainsbury’s, Asda, Morrisons, Aldi, Lidi, Iceland and Waitrose and compared 66 frozen turkeys. The majority of them (50) cost at least 10% more than 12 months previously.

While fresh turkey prices are normally set closer to Christmas, butchers have said suppliers have already charged them up to 30% more than 2021.

A poultry shortage, due to avian flu, has resulted in millions of poultry birds, including chickens being destroyed. The British Poultry Council said that one in three free-range turkeys bred for Christmas have died or been culled, in what has been described as Britain’s worst-ever bird flu outbreak. 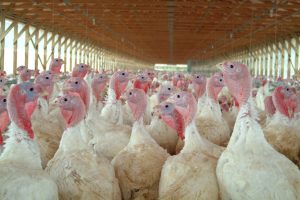 Mandatory housing measures for all kept birds and poultry came into force across Northern Ireland on 28th November, in a bid to combat the growing threat of avian flu.

The housing order legally requires all bird keepers, including owners of pet birds, commercial flocks, backyard and hobby flocks, to keep their birds indoors or otherwise separate from wild birds and is part of the Avian Influenza Prevention Zone in NI.

Chief Veterinary Officer, Dr Robert Huey said: “In order to protect the national flock, we must try to avoid a repeat of last year, which was NI’s worst ever outbreak of avian flu and resulted in a cull of approximately 80,000 birds.

“No-one is safe from an incursion and cases in NI will increase significantly over the coming months unless we all take immediate action now,” he added.