Local politicians and community representatives have rallied to condemn a series of attacks at a newly opened Spar shop in West Belfast.

The Spar at the Twin Spires on Northumberland Street was targeted on the day it opened its doors on Thursday, March 3, and was attacked again over the weekend.

During the attack at 8.15pm on Thursday evening, two masked men poured what is believed to be black  driveway sealant around the Spar shop, targeting high value items in the shop.

No one was injured during the incident, but it is believed that thousands of pounds worth of damage was caused.

A further attack at around 8.45pm on Sunday, March 5, saw a man smashing the shop’s windows, possibly with a hammer. 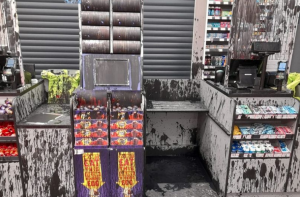 West Belfast MP, Paul Maskey, visited the shop on Monday and said he “utterly condemned” the series of attacks.

He said: “We were down today to speak to the owners and the staff to say that we all stand in solidarity with them. We are appreciative of what they’ve done, they’ve opened up a new business in the heart of West Belfast on the Falls Road, creating employment opportunities for people in the area.

“Those involved in the attacks should stop immediately, no one in our community wants to see these attacks happening. We’re sending our solidarity and will stand with the owners as well as the employees of this Spar.

“The small number who are carrying out this attacks don’t represent us. Our community is a lot better, stronger, and more welcoming than those involved in the attacks.”

Members of the Falls Residents Association were also at the Spar to show support for the owners and employees on Monday.

In a post on Facebook, the group said: “We will continue to support the management and staff during this very difficult and frightening time and we hope that last night’s incident was the last.

“Let’s hope that the shop can move on in peace in providing a vital retail service to the local community.”

The group’s Chair, Fra McCann, added that “those responsible do not represent the people in this community.”

“Falls Residents and other Community Groups are about positive progress and the future development of the Falls and Divis area. We will actively work with the shop and work towards a positive future for everyone,” he continued.

Following the first attack, Paula Clarke, one of the shop’s owners, said they had worked all day to clean up the sealant.

“We only opened at 8am yesterday and there’s been such great feedback from people about how they needed a shop like this in the area. But when we went home last night we didn’t expect this to happen,” she said.

“The shop was closing at 9pm and looking at the CCTV two guys have come in with masks on and thrown black paint all around the place damaging stock. The till area has been badly affected.

“There were four staff in the shop at the time and they’re pretty shocked. It all happened in a few seconds. But we have to look forward and get on with things and get back open again. Everyone’s been working hard all day to clean up the mess and we intend to be open again this afternoon.”

A PSNI spokesperson said: “[Sunday’s incident] of criminal damage happened at around 8.45pm. A man approached and smashed windows of the shop, possibly with a hammer. The man, who was wearing a mask, was described as wearing grey tracksuit bottoms, grey trainers and a dark-coloured jacket with a distinctive orange jacket underneath.

“In [the first] incident, two masked males entered the same premises last Thursday (3rd March) around 8.15pm and threw a tin of what is believed to be driveway sealant over the interior targeting high value items in the shop.”

Local Policing Team Sergeant Peter Tew added: “These are disgraceful attacks on a newly opened business in the area, and we would ask the community to assist Police so that we can bring those responsible to justice.

“Anyone who may have witnessed the incidents or who may have any information is asked to contact police on 101 quoting reference 1702 on 06/03/22.”

A report can also be submitted online using the non-emergency reporting form via www.psni.police.uk/makeareport.

You can also contact Crimestoppers anonymously on 0800 555 111 or online at www.crimestoppers-uk.org.