A stark warning has been sent to retailers who sell illegal tobacco that they could face losing business support, after JTI withdrew its support from two stores in the UK.

Two convenience stores (Supersave Xpress in Harlesden and Maxi Food and Wine in Southgate) were told by Japan Tobacco International (JTI) that they were withdrawing support after they were found guilty of selling illegal tobacco.

Supersave Xpress was ordered to pay £6000 by Brent council’s Trading Standards team after 400 packets of illicit cigarettes were found on the site, including some counterfeit products.

Maxi Food and Wine had its licence to sell alcohol suspended for a three-month period after illegal cigarettes, vapes and Viagra were seized from the site following a test purchase exercise run by Trading Standards. 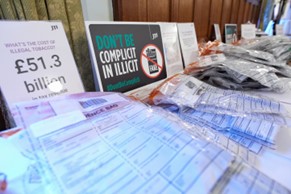 Ian Howell, fiscal and regulatory affairs manager at JTI, said he hoped the stores’ other suppliers would follow suit.

“JTI’s swift response to the criminal activity seen in these cases demonstrates our commitment to backing the actions of Trading Standards in tackling the distribution and sale of illegal tobacco.

“We hope that other businesses supplying services to these stores will follow our lead and withdraw their support too,” he added.

He also praised progress on powers to give Trading Standards powers to take on the illicit trade, something JTI has lobbied MPs for.

“With sales of illegal tobacco on the increase it is good to see that later this year Trading Standards will be given new powers that will allow them to issue ‘on-the-spot’ fines of up to £10,000 against any business selling illegal tobacco.

“It is imperative that honest retailers do their part to help by reporting any information they have about the sale of illegal tobacco or vapes to their local Trading Standards department through the Citizens Advice consumer helpline on 0808 223 1133.”

For further support, retailers can reach out to JTI’s Customer Care line on 0800 163503 or visit JTI’s trade retailer website https://www.jtiadvance.co.uk/dontbecomplicit.