Two enterprising women have been shortlisted for the Scotland/Northern Ireland section of the national entrepreneurship awards.

Emily McCorkell, who runs Lo&Slo Sauces, a specialist in American-style BBQ sauces and other condiments in Derry, and Shera of Karri Kitchen in Portadown, a producer of Asian fusion dishes, have both been shortlisted in the Scotland/Northern Ireland regional section of the popular national entrepreneurship awards.

Commenting on the shortlisting – the only two from Northern Ireland – Emily says: “This is a fantastic development for my small company. It’s tremendous to be nominated for such national recognition along with other business people from across the UK. It will help as I seek to grow my business in both short and long- terms.”

Emily plans to launch a range of new products soon on the back of her success with her existing BBQ sauces.

Originally from Philadelphia in Pennsylvania, Emily, who also runs a popular ‘street food’ truck in Londonderry, launched Lo&Slo in September 2018 and has since developed a range of sauces and seasonings which are on sale in delis and food stores across Northern Ireland.

Emily came initially to Londonderry on a community project to help children and youngsters find a better life. She subsequently married a local businessman and stayed to raise a family and build a career in the food industry.

“Food is a long-term passion of mine that dates back to my upbringing in the US,” she explains. “I’ve found it’s a great way to bring people together and to build understanding and friendships. Food events here in Derry run by the Council are building community relationships that will last in the years ahead.”

Shera, originally from Indonesia, creates original Asian fusion prepared meals for delis and supermarkets here under the Karri Kitchen brand. Karri has also won business with Aldi Ireland for 140 stores in the Republic of Ireland. 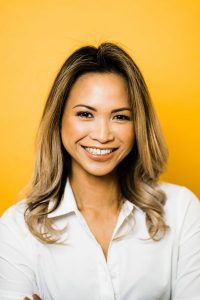 She says the nomination is “immensely encouraging” for her small business as she seeks to build on existing successes which include being part of the Grow with Aldi promotion in 140 supermarkets across the Republic of Ireland.

“It is a further substantial boost for my small food manufacturing business in Portadown.”

Shera has received assistance from business development agency Invest Northern Ireland in the shape of an innovation voucher to create and market her products. She set up Karri Kitchen with husband Chris in 2018 to help introduce Asian food from her homeland in Indonesia and from her time in catering in Australia to Northern Ireland. She worked in the hospitality industry there before meeting her husband-to-be, marrying and setting up home in Portadown, where Chris is a successful businessman.

Founded in 2013, the Great British Entrepreneur Awards acknowledges the hard work and inspiring stories of entrepreneurs and businesses in the United Kingdom.

The awards have celebrated some outstanding entrepreneurs who have gone on to become household names.

The Covid-19 pandemic has seen entrepreneurs facing unprecedented challenges with many businesses concerned about getting through tough times.

Nearly 900 entrepreneurs from more than 650 businesses have been shortlisted across the eight UK regions after a record-breaking year in which nearly 5,000 entries were received.

Founder Francesca James said the quality of this year’s entrants exemplified the strength of entrepreneurship across the UK: “We have seen some incredible finalists over the years, and this year is no exception. It really is one of the strongest shortlists we’ve ever had, and the fact that so many exceptional people have applied during such a tough year is a testament to the resolve and entrepreneurial talent that exists across the UK.

“As well as the recognition, our finalists and eventual winners will join our fantastic alumni community that supports each other all year round. From networking and thought leadership, right the way through to mentoring and guidance – being a part of our ecosystem of entrepreneurs can be incredibly rewarding.

“Creating the shortlist out of so many wonderful applications was incredibly tough, so I don’t envy the judges who will now decide the regional and final winners. Everyone who has been shortlisted should be incredibly proud and we’re thrilled to be able to showcase their achievements.”