The illicit trade continues to be a scourge on the UK’s retail sector.

One in 81 independent stores are under threat from the damage being done to sales and associated basket spend by illegal tobacco, and illicit tobacco purchases cheat UK shops out of around £3.4 billion in lost revenue each year.

This dishonest trade inevitably has a devastating impact on UK wholesalers, from whom the vast majority of honest independent retailers originally buy their tobacco.

In response to this continued threat, Imperial Tobacco and trade industry body the Federation of Wholesale Distributors (FWD) have collaborated on a new, wholesale-focused installment in the award winning Suspect it? Report it! campaign.

Set to appear imminently across the trade press and in cash and carries across the UK, the poster depicts a depot empty of any tobacco-buying retailers alongside the message: “Have you noticed anything’s missing?” It was inspired after evidence from Imperial’s wholesaler partners suggested sudden drops in tobacco sales in depot might indicate a spike in illegal sales in a locality. 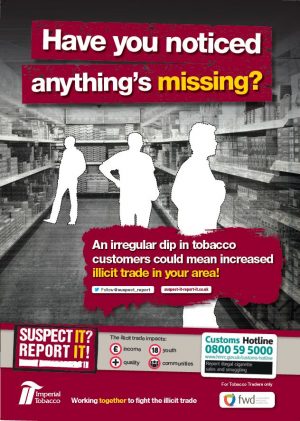 Peter Nelson, Anti Illicit Trade Manager at Imperial Tobacco, comments: “Wholesalers can be a valuable barometer in terms of detecting increased illicit trade and identifying whether organised criminals may potentially be targeting specific regions or communities. For instance, by using information about a drop in cash and carry sales when established retailers either markedly reduce or actually stop purchasing their tobacco products through this legitimate supply chain, tobacco manufacturers like Imperial can commence investigations.

“Any reports of suspicious activity provided by wholesalers and independent retailers to Imperial Tobacco’s dedicated AIT team are handled with the upmost sensitivity and passed on to the appropriate authorities.”

James Bielby, Chief Executive of FWD, adds: “Wholesalers are often the first to know if there is a rise in illicit trade in their area, because their own sales drop as their retail customers are selling less due to the availability of illegal product. Retailers who visit cash and carries often pass on information about illegal sources near their stores. The sooner criminal activity is detected and reported the sooner it can be stopped, and this campaign aims to remind wholesalers and retailers that any information passed on to the authorities, including unexpected drops in sales, supports the legitimate, responsible and duty-paying supply chain.”

Nelson concludes: “Illicit tobacco is an ongoing blight on local businesses at every stage of the supply chain. If any wholesalers or independent retailers have suspicions around its sale in their area, please act by contacting either the Customs Hotline on 0800 59 5000, or your local Trading Standards or Police.

“Remember, if you Suspect it? Then Report it!”

Costa Coffee to roll out more than 1,000 self-serve machines

Kellogg to split into three companies

Global tobacco market expected to shrink by 3% this year: BAT