It’s still early days and hopefully it’s only teething problems but many supermarkets in Northern Ireland have been bruised by delivery issues since Brexit became official on 1st January 2021.

Northern Ireland’s social media was abuzz with anecdotal evidence – with people posting photos of empty shelves. One commented how strange it was to shop in Sainsbury’s and see Spar branded produce on the shelves (as Sainsbury’s has entered in to a supply arrangement with Henderson’s Wholesale).

Other twitter commentators noted that their local symbol shop or independent retailer had full shelves and was operating at full capacity – indicating that it’s the multiples that are taking the brunt of the supply chain issues and bottlenecks.

The Newsletter reported that Tesco had to ditch a delivery of oranges that had spoiled by the time they arrived due to delays at ports. Political finger-pointing and blame-gaming has been ripe – with one party declaring that it’s all the other’s fault while people just want to know that there’ll be food on the table, as they want it, when they want it.

‘The impact of the Irish Sea Border is causing horrendous difficulties for hauliers and this is being seen in shops and businesses across Northern Ireland’ tweeted one MLA who has called on the Northern Ireland Assembly to urgently debate the issue.

The interruptions to trade flows, and the difficulties facing hauliers and logistics operators is resulting in empty shelves in shops and supermarkets, ultimately damaging the Northern Ireland economy considerably.

With Brexit and Covid causing a perfect storm, it’s difficult to assess definitively just how much is Brexit and how much is Covid panic buying with a complete shutdown and the high rate of community spread – with even health trust chiefs releasing a joint statement that hospitals have reached crisis point.

There are widespread practical concerns at how the time consuming bureaucratic processes have been put in place, disincentivising trade.  The increased costs of distribution and the inconcenience to consumers are all on the table for debate in the Assembly chamber.

Marks and Spencer has paused delivery of a small proportion of product lines to ensure its lorries are not turned away at ports like Belfast or Larne.

There may be less choice but firms are working hard to continue to provision the country, a representative of most major supermarkets said.

Customs declarations need to be made for many items arriving in Northern Ireland.

An M&S spokesman said: “We have served customers in Northern Ireland for over 50 years and our priority is to make sure we continue to deliver the same choice and great quality range that our loyal customers have always enjoyed.

“Stores have been receiving regular deliveries this week, however following the UK’s recent departure from the EU, we are transitioning to new processes and we’re working closely with our partners and suppliers to ensure customers can continue to enjoy a great range of products.”

A protocol agreed between the EU and UK is designed to reduce friction on trade from Great Britain to Northern Ireland following a divorce deal avoiding a hard border on the island of Ireland.

The country is following the rules of the EU single market to avoid a hard Irish border and has shifted checks on food standards to Irish Sea ports.

Customs declarations are also required in many cases on products coming in.

A Tesco statement said: “We have a good supply of products coming into Northern Ireland. 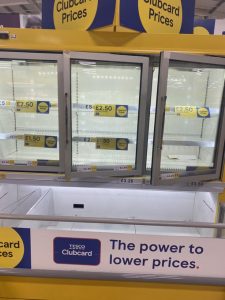 “There has been a short delay on certain products but we’re working with suppliers to get these back on the shelves as quickly as possible and direct customers to alternatives where we can.”

That meant some retailers stopped shipping parcels for a short period but the majority have now come back online.

The Northern Ireland Retail Consortium’s Aodhan Connolly said: “There has been some disruption to supply in other areas too while some Great Britain suppliers get used to a new way of trading with Northern Ireland and this was exacerbated by the days that fresh food was not able to pass from the EU to Great Britain.

“Some regulations were only given to retailers and logistics firms on December 31, which did not give any time to prepare.”

Cross-Channel traffic between Calais and Dover was temporarily halted before Christmas due to the new strain of coronavirus.

Mr Connolly added: “Retailers are adept at quickly changing supply chains and while there may be slightly less choice there is plenty of stock.

“However, in the long-term we will need the UK Government and the EU to work with us to find long-term workable simplifications that keep choice and affordability for Northern Irish families while keeping Northern Irish business competitive.”

Hauliers have described being “overwhelmed” by red tape due to new checks on deliveries to Northern Ireland from the rest of the UK.