The award-winning Mexicana® Vegan has a lot to celebrate this Cinco de Mayo* – 5 May, a national day of celebration for Mexicans all over the world – after Tesco confirmed that the plant-based alternative will be the first-ever vegan cheeze to be introduced to the supermarket giant’s Grab and Go Delis, which have replaced the full-service traditional delis.

Mexicana® Vegan is being introduced to Grab and Go departments in 429 stores across the UK from 5 May and its RRP will be £2.30 for 200g. The extra spicy version of Mexicana® Vegan’s dairy cousin Mexicana® Extra Hot and award-winning Applewood® Vintage are also being introduced, both of which will retail at £2.20 for 170g.

Mexicana® Vegan is the plant-based alternative to Mexicana®, the UK’s number one spicy dairy cheese, and contains the same fiery spice mix and real bell and jalapeño peppers as its famous dairy cousin. The plant-based cheeze is coconut based, made in an allergen-free factory, fortified with vitamin B12 and calcium and Vegan Society approved, so it is perfect for vegan, dairy-free diets and all lovers of spicy food.

Mexicana® Extra Hot is the much spicier alternative to Mexicana® with very hot chillies and peppers, while Applewood® Vintage, which is aged for 12 months, has a rich, smoky taste and is made with Vintage PDO West Country farmhouse cheddar and has a light dusting of paprika. 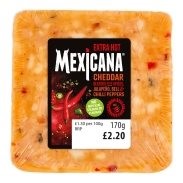 “We are also thrilled that Tesco has decided to broaden its rich of tasty cheeses in its Grab and Go Delis with the addition of our very spicy Mexicana® Extra Hot – perfect for Mexican dishes this Cinco de Mayo* – and our smoky Applewood® Vintage, which is the perfect cheese to enjoy with a nice glass of Argentinian Malbec.”

Hugh Kenney-Herbert, Buying Manager for Speciality Cheese at Tesco, said: “We are really excited to bring in the new Mexicana® Vegan product into the range. It will complement our existing range brilliantly, while also giving our vegan customers a tasty alternative.” 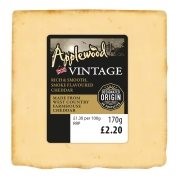 *Cinco de Mayo takes place on 5th May and commemorates the Mexican army’s victory over the French forces of Napoleon III on May 5, 1862, at the Battle of Puebla.