It is the brainchild of Jack Crotty and Martin Poucher. The pair designed it to give small producers a direct route to market via an online platform – just like a farmers’ market but instead of customers heading to their local market, they can shop with a few clicks of a mouse.

Their enterprise won the “Outstanding Organisation” in the Irish Food Writer’s Guild 2021 awards for its support of Irish producers, Jack Crotty explained: “Our food producers set their own prices and get a fair price for every product sold. They keep 80% of sales for every product, compared to 15-50% through supermarkets. The remaining 20% is split equally between the market host and NeighbourFood.” 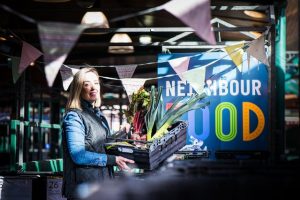 NeighbourFood Newry was the first stepping-stone into Northern Ireland when it was launched by Elaine Quinn in January this year. Over the four months since the launch, it has grown steadily to a consistent 50 – 60 customers each week. And the NeighbourFood EastSide collection point at Portview Trade Centre is due to launch this month and there are plans afoot for new collection points across Northern Ireland. The reception from local producers has been positive, both from those already trading on the Newry market and those signed up to for the EastSide collection point at Portview Trade Centre, Newtownards Road in Belfast.

Just a few of the local producers that will be trading at the NeighbourFood EastSide market include Mike’s Fancy Cheese, Castlescreen Farm, Bara Bakehouse, Sea Source. Hahu Organics, The Curious Farmer and Deli Muru.

NeighbourFood was established in Cork in 2018 and in just under three years has grown to 50 collection points in ROI and has also gained a foothold in the UK with 20 markets in England, Northern Ireland and Scotland.