Grocery inflation in Northern Ireland is now at the highest level since Kantar started tracking the data in 2008, the insight company says.

The latest figures show that sales dropped by 4.2% in the year to 7 August 2022, as shoppers picked up 8% less volume per trip and overall shopping trips declined by 0.5%.

Emer Healy, Senior Retail Analyst at Kantar, said: “Declines were softer over the latest 12 weeks, down by just 0.9%. Although volume per trip declined by 8.8%, shoppers returned to the stores more, up 2.3% year-on-year.

“As shoppers looked for ways to cool down over the month of July, sales of beer and lager increased by 2.4%, ice cream was up 7.3% and fruit squash peaked at 12.9%.

“Grocery inflation in Northern Ireland now stands at 6%, the highest level since we first started tracking the data in 2008. As a result, prices continue to rise and the average price per pack is up 4.1%.

“The increase in average prices was notable over the latest 12 weeks at 7.5% and everyday essentials such as milk, margarine, flour and bread were amongst the categories seeing the biggest increases.”

“However, there appears to be a shift taking place to own-label offers, as sales of premium own label offerings jumped 5.6% as shoppers in Northern Ireland spent an additional £2.9m in the latest 12 weeks.”

Tesco maintained its position at the top of the table and is Northern Ireland’s largest grocer with a 35.8% share of the market as they welcomed an influx of new shoppers contributing an additional £39.1m to their overall performance. 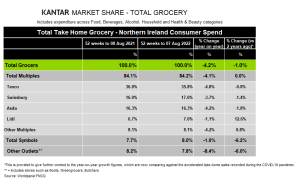 All retailers declined vs last year, although Lidl declined at the slowest pace and increased its share by 0.3 percentage points vs last August. A boost of new shoppers contributed an additional £14.7m to their overall performance.