Post Office Horizon IT inquiry: the lives ruined by huge miscarriage of justice

The Post Office Horizon IT inquiry – described as the most ‘widespread miscarriage of justice in British legal history’ – sat in Belfast over two days. These are some of the stories that emerged of lives ruined by the wrongful accusations.

The inquiry, under the chairmanship of retired high court judge Sir Wyn Williams, has invited evidence from former and current sub-postmasters and sub-postmistresses, their assistants, managers and family members who have been affected by the scandal.

Between 2000 and 2014, a flaw in the newly installed Horizon computer system made it look like money was missing from post offices.

It led to suspensions, termination of contracts, wrongful prosecutions and even jail terms for those wrongly accused.

Some 19 post office workers in Northern Ireland were convicted, but it is believed there were more victims of the scandal who have not come forward. 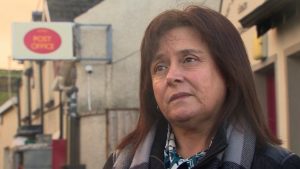 Deirdre Connolly, from Strabane, took over a Post Office in the border village of Killeter in 2006.

In June 2010, a Post Office auditor arrived at the shop to tell her she was facing a discrepancy of around £17,000.

During an interview with a fraud investigator, she was asked if she had taken the money for paramilitaries.

Mrs Connolly said the question made her fear for the safety of her family.

Shaken by the allegations, she and her husband re-mortgaged their house, but they were declared bankrupt in 2013 after their debts built up.

She developed epilepsy due to the stress, and she felt unable to leave home for three years because of the stigma attached to the false allegations.

“My husband had to go through it all on his own in Killeter, people talking behind our backs. He was my rock. He’s got high blood pressure now [and] my mental health will never be the same again,” she said.

Mrs Connolly called on the Post Office to hold its hands up and apologise.

“I want those people in authority who gave the order to treat all sub-postmasters like criminals to be punished,” she said.

“In my case, Post Office investigators threatened my life and the lives and security of my family [by] suggesting that I took the money for paramilitaries.”

“All I could think of is is this going to get out? Are they going to say that I’ve been taking money? I felt for the safety of my family,” she said.

She described how the action against her caused financial hardship and a mental health breakdown.

“My mental health will never be the same again. Constant tablets,” she said. 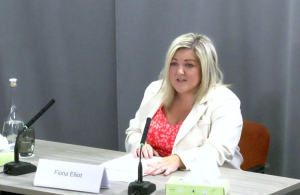 Mrs Elliott bought the village shop, Post Office, attached buy-to-let house and adjoining car park in Clady in 2005 with a view to run it until retirement.

“At the start, the Horizon system seemed grand. But very quickly discrepancies started appearing. At first it was £20 here, £60 there. The post office had to be looked after, so I was taking money from the shop till to put behind the counter to keep it right.

“Every week, we were looking in bins late at night. Were people stealing scratch cards, was lottery money going missing? I knew I had been doing nothing wrong, but the money kept disappearing.

“I constantly contacted the helpline for further assistance, asking for an audit. When two people finally arrived in 2009, they found £6,000 missing from the system that day. I was told I could be facing a criminal offence. I explained to them I had been putting money in for years to cover the shortfalls. Hundreds of pounds every week.

“I was told the £6,000 had to be paid back right then. I hadn’t got that sort of cash in the shop, but they told me I couldn’t leave the premises to go to the bank and they refused to accept a cheque.

“The only thing I could do was ask my brother who runs a car business in the town, to lend it to me. They never gave me a receipt.”

“Six weeks later I was taken into a room with four men and told I would not be facing any criminal offence, but I didn’t have the heart to go back to the business.”

Mrs Elliott later took a redundancy package from the Post Office. “I took it. I didn’t want to be there.

“I rented the shop out, but the debts were there. The whole thing was repossessed by the bank, the shop, the post office and two buy-to-let houses. I had paid £322,000 for the premises alone. The bank sold it on for £40,000. Now it’s all boarded up and run down when it should be the centre of the community.” 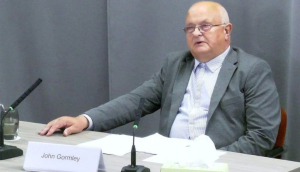 Co Derry man John Gormley purchased a supermarket in 1982 with redundancy money from his engineering job and when that proved successful, added a Post Office in Shantallow shopping centre in 2002, which was then moved to the local SuperValu.

“The first discrepancy was in the second or third week I was there,” he told the inquiry. “It wasn’t large. Between £60-£80.

“I raised it with the manager but as time went on the pressure started to grow and the shortfalls had to be made good. There were very few weeks we had a break even.”

Mr Gormley said a new manager was put in place for two years, but left and instigated a constructive dismissal case concerning the financial discrepancies. It resulted in an order to pay out £10,000 which he couldn’t afford.

“That litigation compounded the problems,” he said. “Debts were increasing as I had to use any profit from the supermarket to offset the missing money in the Post Office.

“In 2008, I had no option other than transferring the business back to the franchiser. My family was left with nothing, but I feared I would end up in prison had the Post Office debts not been paid.

“I just wanted it all to go away, but there were weeks when I didn’t know if we’d have a loaf of bread on the table.

“Throughout my years at the Post Office I would have questioned my staff and accused them of being responsible for the shortfalls.

“It’s hard to accept the Horizon system was responsible the whole time.” 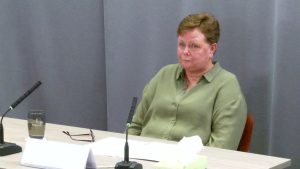 Heather Earley, who ran a shop with a Post Office in Mossley, found a shortfall of £10,000 emerged when a customer came in for a regular cash withdrawal in December 2013.

The customer was later prosecuted for fraud, but Mrs Earley still had to pay back around £50,000 in discrepancies that appeared in her system.

She said she was forced to max out credit cards and turn to members of her family to secure loans.

She was initially terrified of telling her story in public but now wants others in her position to come forward.

“Where did my money go? Somebody must be sitting on a pot of gold somewhere.” 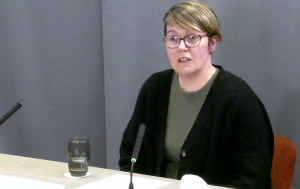 Sinead Rainey, from Moneyglass in Co Antrim, told the inquiry how Post Office auditors informed her she had just one hour to raise £63,000.

Having taken over the Spar Shop, she was not a postmaster but would handle minor transactions such as cash deposits and withdrawals.

Auditors arrived at the shop in May 2019 and told her she owed them £63,000 and that she had an hour to get as much money into the safe as possible, with the sum to be deducted from the outstanding total.

“I got into the car and drove home. I lifted a bucket and emptied my weans’ money boxes into them. I emptied my purse and any money I had in the house — 2ps, 5ps, everything went into this bucket,” she said.

“The next thing, Mummy and Daddy arrived and I didn’t know it but Darren, my husband, had rung them and they had went to Ballymena and withdrew as much money as they could out of their own bank accounts. But they couldn’t get enough so they rang two of my uncles and they did the same.

“I don’t know the exact figure because I never got a receipt, but somewhere in the region of £42,000 was in that bucket.

“I couldn’t even drive at that stage so I got my sister to drive me down to the shop and I carried that bucket in.

“And the auditors made me stand there and watch them count it, and tutted and made me feel so lousy for bringing them all these pennies..

After investigating the matter, the PSNI said she would not face prosecution, but officers also advised her to follow similar cases faced by Post Office workers in England.

Maureen McKelvey, who was subpostmistress at Clanabogan in Omagh from 1990 to 2001, provided a human impact statement to the inquiry.

“The auditors marched in one day and demanded my keys. I was then told that a shortfall had been identified and I would have no more access to the post office. They told me they were from Special Branch. It was terrifying and humiliating,” she said.

Mrs McKelvey said she was served with a notice of prosecution for theft but was left in limbo for five years.

“I was under so much stress that my thyroid ruptured and I had to undergo major surgery. The doctor told me had this happened anywhere else in my body I would have been dead. He said it was due to stress.”

Mrs McKelvey was eventually found not guilty but felt forced to sell the business at a significant loss because of the stress and financial pressure.

“The Post Office took everything from me, quite literally. They took my future; I had planned to run my business up until retirement.

“I lost my business, my health and my reputation.”