Ruairi McBride: Staying ahead of the game

“I have two main goals each year in this business and they are to grow the business for my directors and let them see that we are making money and to keep everyone on my staff in a job. Everything else is a bonus.”

For Ruairi McBride that added bonus came in the form of a 2022 Neighbourhood Retailer Award, naming him Store Manager of the Year.

However, Ruairi was quick to share and dedicate his award with the whole team at Ivan Wilson Limited in Limavady and was full of praise for them all.

“I was delighted and equally so surprised. It’s a testament to what the team does,” he said.

“I was not expecting anything, it took me away! The team deserves this award as much as me.

“I’m a big believer in the team and their hard work. When the judging process is going on it’s the team that is doing all the hard work. I might have the ideas but it’s entirely down to the team what is done in the store.”

‘I want to build the team to take on what I do, I would be lost without them’

Indeed, the Spotcheck judges were very impressed with the work of the team, guided by Ruairi, commenting on his “attention to detail” and a “deep understanding of the working of the business”.

“Teamwork and individual recognition were integral to the overall plan to achieve objectives set and the focus on the customer experience has produced very positive results,” they added.

It is this customer experience that Ruairi keeps as one of his main goals, ensuring that those customers they have built up over the years are provided for whenever they come into the store.

The shop in Limavady opened in June 2018, with Ruairi at the helm from the very beginning.

“I set it up from scratch. I was involved in the planning, layout, the whole lot. It was a personal project as well as a company one,” he explained.

The current company directors are Michael and Steven Wilson, whose father, Ivan built up the original shop. As well as their shops in Limavady and 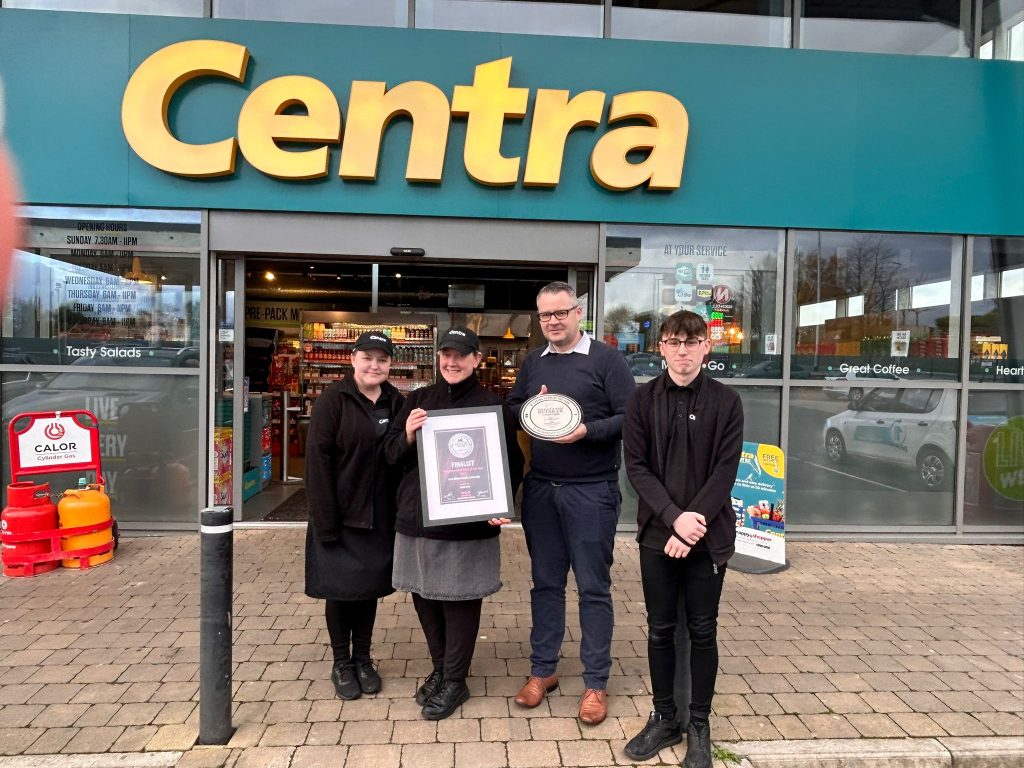 Coleraine, there is a heating oil company, a car dealership and a pub.

With plenty of competition in the area, Ivan Wilson Limited are making sure they stand out from the rest.

“If you take out the larger supermarkets in the town, there would be seven other stores that I would classify as being similar to us. What we offer is a very modern, dynamic feel, although it’s still classified as ‘the new shop’,” said Ruairi.

“I am a big believer in respect, that goes for the stock, the owners and the customers and we also keep cleanliness at the highest standard.

“It’s about trying to adapt to what our customers want and I would say we are the most dynamic store for our customers. We have customer toilets, a seating area for people where they can come and charge their phone or use their laptops, we have public WiFi, as well as off-street parking. We offer a slightly different service to what other retailers would offer.”

In their comments on Ruairi, the Spotcheck judges also noted his “energy and commitment” which they said was “underpinned by experience and confidence”.

“I have always been in retail, for over 20 years now – I started part-time as a 16-year-old in a local shop in the storeroom,” said Ruairi. “A year later I was promoted onto a trainee manager scheme.”

However, a career in retail was a “left-field choice” for Ruairi as he was originally going to be an accountant.

“I had no plans for retail at all, but I got too used to the money and the challenges in retail. I got my first manager’s job at 21 and I have been in the game ever since.

“I have often thought about leaving it, but there is no danger of me leaving retail now!”

‘I am a big believer in respect, that goes for the stock, the owners and the customers’

His energy and commitment remain as fierce as ever, as he explains he wants to be “at the forefront of what is going on in the town”.

“I would be afraid of taking my eye off the ball and missing an opportunity to develop something in the store.

“We were the first store to launch an app called ‘beat the queue’, where you can order your hot food online and come and collect it. It has proven very popular for us.

“We are also one of the first stores to introduce the ‘gander’ facility, which offers real-time information on the price of an item, including the reduced price. This has helped us to reduce our waste and keeps the customer aware of what the reduced prices are in the store.

“We were the second store in Northern Ireland to introduce the ‘snappy shopper’. You download the app, key in your postcode and you can browse through and choose what you want and select your delivery time. Where we differ from the multiples is that we guarantee delivery within an hour. It’s proven very popular and also the basket spend would be between three and four times more than if someone comes into the store.”

There are other key developments in progress for the store, with an application currently lodged for an off licence and the installation of self-scan checkouts, which will be contactless and also take cash. 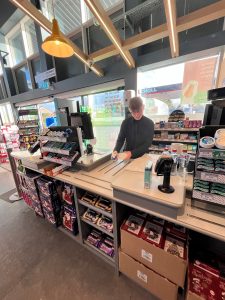 “About 50% of our customers still pay by cash, so we will be the first store to have these self-scanners in this area.

“People think cash is on its way out but that is not imminent and we do not want it to go faster than it already is. There will still be kids getting pocket money and will find the novelty of using the screen and using their cash to pay. We were very firm that we wanted this facility and hopefully that will be in store in February at the latest.”

Of course, over the last few years there have been challenges to face, none more so than the Covid pandemic and the subsequent lockdowns and restrictions which retail faced.

“Whenever the lockdowns started it was a real culture shock, times changed very very quicky. We were very well informed of the guidelines and when they came our way, we just adapted. We followed the guidelines, introduced face masks, closed our deli counter down and our seating area was closed.

“Staff were very concerned and obviously people had to shield. It was hard going, there was a lot of change in a short space of time while trying to keep people safe and adhere to the guidelines.

“It was a tough time but we got through it. It was the hardest bit of trading that we have ever had to do, but by and large we did what we had to. We held weekly meetings and when any new guidelines were communicated, they could ask me whatever questions they wanted.

“Our trading seemed to take off. We had people staying away from the larger format stores, so they came to us, so we really traded well through it and it stood us in good stead. We still believed that though statistics were down, Covid is still a very live thing. We were very reluctant to be blasé about lifting our restrictions.”

LOOKING TO THE FUTURE

Notwithstanding the challenges over the last few years, Ruairi said they have plenty to look forward to and continue to develop within the store.

“We want to stay as dynamic as possible, we do not want to pull any dirty tricks. We have built up from nothing and now have over 6000 customers coming to our store every week. So, it’s very important to keep those people and satisfy those people. We have to keep on top of our game.

“We do very well with our hot food deli counter and our bakery, that drives us – we have a lot of people who come from further away and come to us.

“There are plans to have 600 houses built around us, so with that in mind, I have expanded our take-home meal solutions. People did not realise the scale of how they could mix and match their take-home food. As far as I am aware, we have the fourth best store for that facility in NI, and that has been a real big draw for us. The other three are SuperValus and we are Centra, so that is a big thing for us. I was convinced it would work, but I just did not know how quickly it would work.

“We have the store that we are looking to develop in Limavady. In Coleraine there is a possible rebrand from Mace to Centra, they are still conversations but they are big exciting plans. We are also hoping to introduce a pay-at-the-pump facility there too. We are always on the lookout for new initiatives.”

When asked what is most rewarding about his work, without any hesitation Ruairi says it is “keeping people in jobs”.

“That is a big thing for me. I want to build the team to take on what I do, I would be lost without them. I describe some of them as the spine and I would find 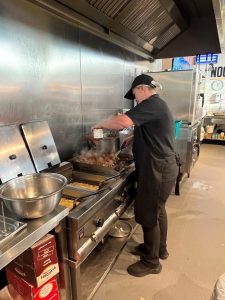 it very hard to replace them. In Limavady I have about 18 staff members, four of whom have been with me from we opened in June 2018, while in Coleraine I have about 16 members of staff.

“The fact that people come and choose to spend their money with us – that is the biggest compliment when you see a regular customer coming back. It’s about finding out what they want and to keep them coming back to you.

“We have a great team effort and morale here. We have over 6000 customers coming to the store and that is a real testament to the staff and what they do.

“Having built the business from scratch, I have had a lot of input in the business being successful. It’s the team’s hard work and the guys on the ground and being their friendly selves, that is not me who does that, it’s them. This is their success as much as mine.

“This is what we do, we like what we do and like to think we are pretty good at it. I want to mould my successors, I want to encourage my staff to be standing collecting the Store Manager of the Year award for themselves. Staff have been promoted from within the store, there hasn’t been anyone brought in from outside.

“The guys have bought into this and they hang on every word. They know the opportunity to be store manager is there, but they have to take every responsibility.

“On the awards night I met my first ever manager, he was there on the night too and came over to congratulate me. It was so fitting that he was there. I would still believe that he is the greatest manager I had, he taught me so much from the first day. He saw something in me and I have never forgotten that. He gave me the benefit of his experience, so it was a full circle moment that night.”