Scottish retailers get a new law to protect them from crime – will Northern Ireland follow?

A former police officer who was the victim of an attack in his shop has praised a landmark new law offering shop workers greater protection.

Hussan Lal, 59, was kicked in the chest when he confronted six men barging into his food shop.

At the Scottish Parliament on Monday August 23 he gave thanks to Daniel Johnson, a Labour MSP and former retailer, who brought in a Private Members Bill to offer retailers more protection against crime.

Mr Lal, representing the Federation of Independent Retailers (NFRN), also paid tribute to other parties including Ash Denham, Minister for Community Safety in the Scottish Government, who agreed to turn the bill into a law which comes into force on August 24. 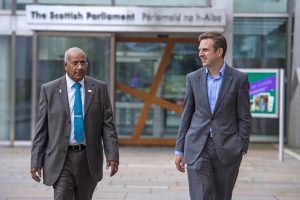 The new legislation takes effect at a time when research from the British Retail Consortium revealed that in 2020, there were 424 incidents of violence and abuse

every day. Meanwhile, an Usdaw survey found that in 2020 and out of 2,729 shopworkers surveyed, 88 per cent had experienced verbal abuse, 60 per cent had been threatened by customers and 8 per cent were assaulted.

Mr Lal said: “I was proud to serve Queen and country before moving into retail. But it is not easy. Instead of charging people I am attacked and many other retailers are too. It is horrendous.

“We are grateful to Mr Johnson and other parties including Ash Denham, the Minister for Community Safety, for making this new law come about. We now have something to charge culprits with.

“But we now need the police to enforce it. I don’t criticise the police because I know where they’re coming from . I know what limited resources they have and the wide range of duties they now have. However their first duty is to protect the public. 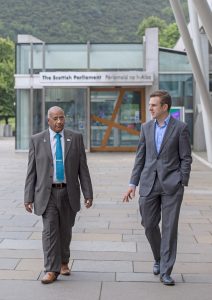 time. It was six people against one. As I was phoning the police one was kicking me in the chest. I didn’t know where it would end – if one of them would pull a knife.

“Police need to send someone out promptly otherwise retailers don’t feel protected and criminals are encouraged to attack again. We are assaulted and racially abused.

“We need the police and public to understand that these incidents are not minor and covid is not the main cause. Aggression predates this.”

Mr Lal was an officer in the West Midlands Police Force for 25 years.

Daniel Johnson said: “I’m delighted to see my Protection of Workers Act come into law on Tuesday. It represents a victory for retail, its staff and customers.

“Throughout this process I heard many horrific stories of abuse and spoke with many workers on the front line every day.

“This Bill will ensure retail workers have the same protections as those in every other sector and enables the police to properly act.

“I will continue the fight to ensure my Bill is properly enforced and would like to take the opportunity to thank the Federation of Independent retailers (NFRN) and all other stakeholders and retail staff for working with me from the very beginning of this process.” 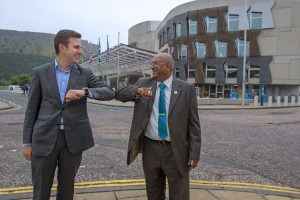 The NFRN will continue to campaign for effective legal protection for shop workers across the rest of the UK in the face of rising levels of abuse and violence.

NFRN National President Stuart Reddish said: “I get calls from hundreds of retailers who are crime victims. The impact of retail crime can be devastating and long[1]lasting – not just in terms of physical injuries but on anxiety and stress too. The government has to act and tackle retail crime once and for all so everyone working in shops have confidence in their workplace and that should a crime incident occur they will receive the response and protection from the government, police and justice system that they deserve.”