A local charity has helped to raise £1 million for east African communities – with the help of Wilson’s Country.

Wilson’s Country chairman, Angus Wilson, formed the ‘Water for Life’ project after travelling with eight other business leaders from Northern Ireland to Uganda in 2010 to see first-hand the work of local charity, Fields of Life.

#WorldWaterDay is on March 22, and a fundraising initiative led by Northern Ireland businesspeople has reached a £1 million milestone in its ambition to provide East African communities with access to clean water.

Since the initial target was set a decade ago, £1m has been raised, with more than 815 wells being drilled across Uganda, 650 of which were formed using the initial rigs funded by the Water for Life team; resulting in 500,000 people having access to a safe and clean water supply.

“We are thrilled to have reached this monumental milestone, which as a result has provided more than 0.5 million people in Uganda with access to clean water – one of the most fundamental basic human rights. This couldn’t have been achieved without the generous support from those who have supported our fundraising efforts over the last 10 years.

“There’s still much work to be done and this year we’ll be focusing on further drilling work in two districts within Eastern Uganda – Namutumba and Butaleja, where at least 38% of the population still don’t have a safe water supply. Girls and women are the most affected in these areas – they’re often subjected to gender based violence at the long queues at water sources or as they walk along the route to these sources. Domestic abuse is also common – resulting in many of the girls missing valuable school hours. Our commitment to this project will see more wells drilled in these districts, to make it a safer place for young girls and women, and their families, to live.”

As the world prepares to mark #WorldWaterDay on 22nd March 2021, the Water for Life team is continuing its efforts to fundraise further to sustain more drilling projects and build more awareness of how many people living in in East Africa are still unable to access a regular supply of safe water.

The ongoing COVID-19 pandemic forced much of the fundraising activities planned in 2020 to be postponed and drilling work also had to cease in the first lockdown until safe practices were developed.

“The pandemic continues to have a devastating impact on vulnerable communities in East Africa. Due to many of these villages not having good sanitation or clean water to wash their hands regularly, the spread of COVID-19 has increased rapidly.

“Fields of Life’s mission for 2021 is to educate more people about the life-threating difficulties these vulnerable communities face, and with their help and financial support, the charity hopes to dig a further 48 wells over the next 12 months.”

The cost to drill each well is £8,550. To demonstrate the level of work and expertise that goes into each dig, Fields for Life and its Water for Life team hosted their first virtual event this month, where people had the opportunity to watch a live drilling take place and hear from the team in Uganda. 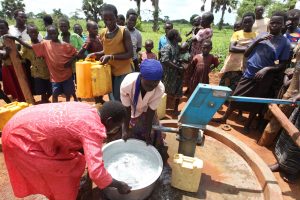