Changes in consumer shopping habits have had an impact on the grocery market in Northern Ireland, with sales dropping by 1.8% in the year to 30th October 2022.

According to recent statistics from Kantar, grocery inflation now stands at 8.4%, the highest on record as the average price per pack rose by 5.5%. Increases in average prices over the 52 weeks continue to be most noticeable with essential lines, such as margarine up 21.7%, milk up 21% and flour up 17%.

Emer Healy, Senior Retail Analyst at Kantar said: “Shoppers are beginning to return to store more often, with visits up 1.6% compared to this time last year, however they are picking up 8.8% less volume per trip.”

Emer said there was a noticeable drop in seasonal shopping, particularly around Halloween, but shoppers are still focusing on making the most of Christmas. 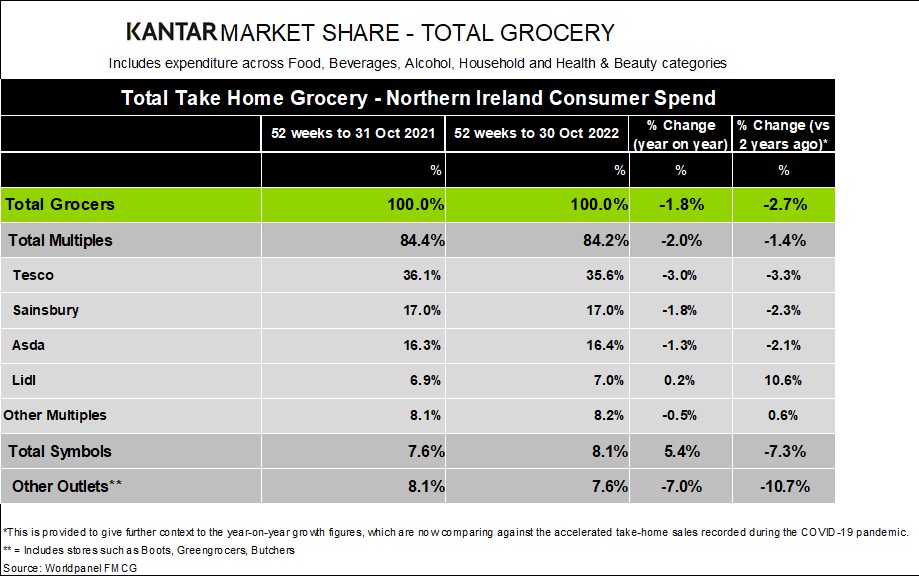 “Over the latest 12 weeks, grocery sales grew by 3.7% as shoppers returned to store more often (5.4%) and average prices increased by 8%. Shoppers in Northern Ireland pulled back on Halloween festivities this year as pumpkin sales declined by 33.1%, but their focus is clearly on the Christmas period as gifting chocolates, mince pies and fresh bacon joints sales soar by 29.8%, 29.3% and 20% respectively.

“Tesco maintained its position at the top of the table and is Northern Ireland’s largest grocer with a 35.6% share of the market. Tesco welcomed an influx of new shoppers in store which contributed an additional £46m to their overall performance,” added Emer.

Lidl and Total Symbols are the only retail outlets to see growth versus last year up 0.2% and 5.4% respectively, as all other retailers declined. Lidl continues to see the strongest boost of new shoppers up by 4.8 percentage points which contributed an additional £16.5m to their overall performance.

Sainsbury’s holds a 17% share and saw a 1.6 percentage point rise in new shoppers. Asda holds 16.4% of the market this period and welcomed new shoppers in store contributing an additional £4.2m to their overall performance.

Asda plans to expand its convenience sector with 300 new stores