Brian Donaldson is upbeat as Irish oil firm, Maxol, presses ahead with its multi-million, five-year plan to expand and streamline its operations across the island of Ireland. Russell Campbell spoke to him at the start of January and asked how the strategy was progressing…

The challenge for petrol retailers in the modern market lies not so much in how to attract consumers onto their forecourts as it does in ensuring that once there, shoppers make purchases in sufficient volume to ensure that the site remains sustainable.

Oil is a low margin business and, as customers increasingly feel the burden of the prices they are paying, the supermarket sector and discount retailers have emerged to seize a growing slice of this ultra-competitive market.

That’s acknowledged by Brian Donaldson, chief operating officer for leading Irish oil firm, The Maxol Group, who says that while retailers must have a value offering, it can’t be to the detriment of their business and its long-term survival: “Margins on fuel are low and are unlikely to improve dramatically as the market is price-competitive on both sides of the border, so opportunities for us to improve our profitability are down to our own growth strategy, the support that’s given to our retailers on the convenience mix by our wholesale shop partners and how we control our overhead costs,” Brian told Neighbourhood Retailer recently.

“I think it’s now acknowledged by our wholesale partners that there’s  a need to deliver optimum margins on the convenience side of the business so that retailers are able to give a value offering and still make an appropriate margin. There’s little point in continuing to make strong sales if our retailers aren’t generating the necessary bottom line for their effort and investment.”

There are currently 227 sites in the Maxol network across Ireland, 100 of which are owned by the company and 65 of which are located south of the border. Brian described business for the group as a whole in 2013 as “reasonable” and said that while retailers everywhere are still finding business to be “very challenging”, volumes are up as a result of the refurbishment of existing forecourts, the roll out of Maxol’s new forecourt signage, new dealer business and investment in site acquisitions.

The relentless drive to expand company networks is a constant across the industry and Maxol is currently well advanced with six new projects, two of which are almost at completion. They’re part of a deliberate focus on acquisitions that has characterised the group’s strategy throughout 2013. During that time, Maxol considered quite a number of possible opportunities at locations across Ireland, although Brian admitted that for a number of reasons many of the properties that he’d viewed didn’t progress further:

“Really, the fall-out from the economic collapse is still at play in the property market and quite a number of potential transactions are caught up in complexities involving debt issues and, in quite a few cases, NAMA is also a factor” he added. “Notwithstanding this, we remain focused on identifying the right properties and are well funded to make new acquisitions in 2014”.

The roll-out of Maxol’s vibrant new ‘Brio’ corporate imagery, which it launched in September 2012, is continuing and Brian said that he felt that the rejuvenating effect of the new brand identity had made a noticeable contribution to the group’s sales totals during 2013: “It’s a catalyst that has brought our new image and approach right out into the public eye,” he remarked. “It has greatly motivated our retailers and given them great confidence in the brand and the future of their businesses. Since we commenced the roll-out, we’ve seen double digit growth across the independent sector with more than 15 new independent dealers on board in just the last 16 months, so that investment has been absolutely critical.” 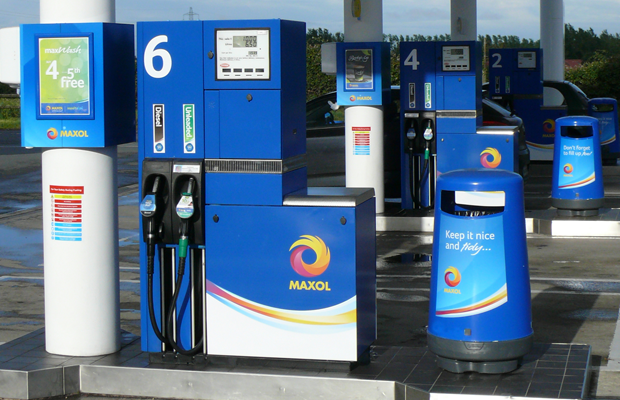 There can’t be many regular road-users who haven’t noticed the slow emergence of unmanned forecourts across Northern Ireland and in parts of the Republic. Maxol has its own stake in this sector with the “auto24” sub-brand and, since the first trial opening at Carryduff in the outskirts of Belfast two years ago, it has gone on to establish three more of the automated facilities including two during 2013 at Bridge End in Belfast and Hazelbank in Whiteabbey.

In the south, a former Texaco site at Blue Lagoon in Clontarf, Co. Dublin, was recently purchased and is also due to be re-opened under the auto24 banner. Work should start on that before the end of February and it will open in June.

Looking towards the future for Maxol, there will be a focus on ‘Moreish’, its new café/deli brand. At present, it can be found only in the Republic of Ireland where it was introduced to nine stores during 2013. However, Brian has indicated that Northern Irish customers may well see the Moreish brand in their outlets as well, as Maxol continues to develop its close relationship with its retail partner there, The Henderson Group.

“We’re also looking at how we use social and digital media in order to build up a more effective and more regular connection with our Moreish customers,” added Brian.

The priorities for the rest of 2014 will include the continued roll-out of the new brio identity, the expansion of the company-owned and dealer network and the Moreish food and cafe brand:

“We are aiming to acquire more new sites by the end of the year, either existing forecourt businesses or greenfield locations to support our on-going expansion of our network,” said Brian. “We are also continuing to buy land that adjoins some of our sites – we completed three of these deals in 2013 – and we see that as preparing for the future. If a property has the potential to expand, then we’re buying the surrounding space to enable that growth.”

“As a group, we also plan to continue investing in pay-at-the-pump technology,” added Brian.