Industry heads have warned that political stability is essential to help Northern Ireland businesses tackle some of the key challenges they face in 2023.

The NI Executive remains inactive as the DUP refuses to return to government amid ongoing Brexit negotiations; while Secretary of State Chris Heaton-Harris has called on Stormont leaders to engage in fresh talks ahead of an upcoming election deadline.

Against this backdrop, some of the key figures in business and trade in Northern Ireland have warned retailers to brace for a challenging time ahead and have pleaded with politicians to return to the Executive table.

Chief Executive of Retail NI, Glyn Roberts called on the Executive to be “immediately reinstated” and said the restoration of devolution should be an “immediate priority”.

“With a cost-of-doing-business crisis, the most expensive business rates in the UK, rising energy costs, inflation and a fall in spending, 2023 is going to be the biggest ever challenge for Northern Ireland’s high streets.”

Indeed, post-Christmas footfall in Northern Ireland remained low, with a rise of 5.1% in the week after Christmas. While a rise on the same period in 2021, compared to 2019 figures footfall in NI was down 22.5%.

The latest report from retail data firm, Springboard, showed a weaker rate of footfall growth in Northern Ireland when compared to the UK as a whole, with NI seeing the second weakest rate of increase.

In his new year message, Glyn Roberts also pointed out that when rates bills are struck later this year, NI businesses will suffer once again.

“English independent retailers and small businesses are getting a 75% reduction in their rates bills, yet their counterparts in Northern Ireland will not get this reduction and are likely to have inflation busting increases in their bills when local councils strike their rates,” he said.

“This is blatantly unfair, and Retail NI is making this issue our top priority to ensure there is parity of rates relief for our members.

“Throughout this crisis, we should have had an Executive in place with Ministers pulling out all the stops to support local families and small businesses,” he added.

This sentiment was echoed by the NI Chamber of Commerce President, Gillian McAuley in her new year statement, in which she said political stability was a “pre-requisite”. 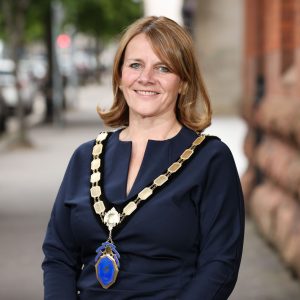 “While most businesses continued to trade well or at least reasonably in 2022, by the end of the summer as many as 20 per cent were telling us they were simply covering costs as inflation began to spiral,” she said.

“It is not yet clear what 2023 holds for the world as the protracted war in Ukraine continues. But we do know that this is a time when we need political leadership like never before.

“The cost of having to endure a stop-start Executive alongside battling the pandemic is almost six years of very little strategic decision-making. As a result, we are falling behind significantly in many areas and important time has been lost at a great cost.

“And yes, as is often said, business is ‘just getting on with it’, but there is so much more we could achieve in partnership with a functioning government and legislature,” she added.