Pork and ham product choice could be limited this Christmas, farmers warn

Retailers in Northern Ireland could be facing more limited choice of pork and ham products this Christmas as a result of labour shortages at abattoirs, the Ulster Farmers Union has warned.

He told Neighbourhood Retailer that it may be necessary to cull healthy pigs, if matters get much worse.

However, he felt it was unlikely that Northern Ireland retailers will have to resort to importing pork products from Europe.

Farmers in GB have warned that a mass cull of pigs could be on the cards due to a surplus of swine as a result of labour shortages in abattoirs.

A post-Brexit exodus of eastern European workers has been blamed for the labour difficulty, with some abattoirs operating at 20% below capacity.

“There’s a lot of pressure at farm level with not being able to move pigs off.  There are labour issues in the processing factories and they can’t process the normal quantity of pigs, and that means quite a tight timeline on pig production,” he says.

“Certain number of pigs normally leave the farm each week and when that doesn’t happen there’s a pressure on the farm. The other consequence is that pigs are not going, but they’re still eating meals, and when they do get away they’re overweight and they cost more and return less.”

Mr Irvine said Northern Ireland isn’t at the stage of mass culling just yet, but it may have to be considered.

“There’s no easy answer to what is the best thing to do here, and it’s always an option – if it continues to get worse it’s going to have to be considered,” he said.

“We’re trying all avenues to see if we can get more throughput through the factories.”

From a retail point of view, the number of product lines that would normally be in shops is probably already being reduced, he said.

“They’re streamlining product in every way they can and delivering the most handy and speedy cuts, so consumer choice is going to be limited,” he said. 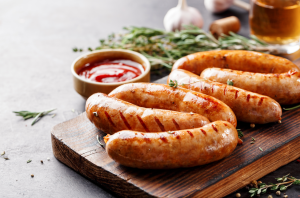 “Demand from GB is strong, so in the run-up to Christmas there will be a reduced number of lines.”

Mr Irvine warned that the speciality cuts and speciality sausages may not be as simple to deliver.

“If you want a nice ham for Christmas I would buy it soon and have it in the freezer, rather than leaving it until Christmas Eve,” he warned.

And he warned that political intervention is needed to resolve the problem.

“If we could get more workers online, the pigs are there and demand for products is there – there’s just this hiccup in the middle. That answer lies with the highest political level to free up labour,” he said.