In a world of fierce competition from the multiples, and with traditional high street independents under threat in recent years, one traditional butcher in East Belfast is soaring through it all – despite the difficulties in recent years. How come?

The family owned business has had the wherewithal to pivot, adapt and respond to consumer trends – before they even become trends.

NR talks to Mark Warwick about the business his father started back in 1987, and finds out why it continues to thrive to this day, when other traditional butchers have floundered along the way.

“When dad started the business in 1987 there were five other butchers on the same road. I was always about the business from a very young age – as a child, running around, probably getting in the way. From the age of ten or twelve I started helping out in the school holidays – effectively, before I even left school I was a fully trained butcher” said Mark.

However, he wasn’t certain if that was the path for him. Mark spent a few years working in IT offices and doing different things before realising it wasn’t for him.

“The block is where I’m at home” said Mark “So I stepped back into the business. The whole office thing just wasn’t for me. I like talking to customers, building up relationships. We’ve seen generations coming in – we’re now serving the children and grandchildren of our early customers.

“East Belfast is a close knit community – ask anyone in East Belfast where Warwicks’ Butchers is and they’ll know.”

The business was established by Mark’s father Sydney, who is still very much involved, but Mark took over at the helm around 2008. 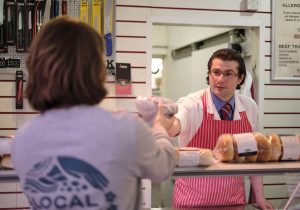 “It’s been a teamwork thing ever since. I look after most things, dad has taken a bit of a back seat but is still at the counter. We still have customers coming in that we’ve had since day one,” said Mark.

“Back in 1987, dad was one of the first traditional butchers to start introducing new ideas – stir fries, marinades and so on. There were five butchers on the road and they were poking fun at him for these new-fangled idea.

“Dad had the vision to see these new trends and introduce them to the business. We’re the only traditional butcher left on the road now. Quality is at the heart of that. People want alternatives and choice – it’s not just meat and two veg anymore.

“We need to keep it interesting, exciting and focus on taste. Where the major multiples have the advantage is on convenience – with their long opening hours. We’re open 8 ‘til 6, so if someone works 9 to 5 it’s harder for them to get in.”

Hence, the Warwick’s Home Delivery service has revolutionised the business. Warwick’s website is detailed, extensive, attractive and easy to use.

“Customers can do all their shopping online – they don’t have to rush in before the doors close. We started to plan for online delivery about ten years ago but just didn’t get round to it. We put it on the back burner, knowing it was a bit of a gamble. It was forced on us through Covid, not ‘by’ Covid” explained Mark. 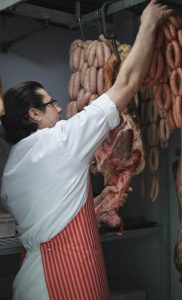 “The timing was right. At the start of Covid, people were sending us orders via facebook and Instagram, or by phone then paying later. It was messy. We launched the website in May 2020 which made the whole process neat and tidy. It made such a difference – so much faster and easier to sort out orders with payments online. There was less admin – we could just get the order packed and ready to go.

“Click and collect was also very popular. People could shop comfortably at home, plan out their meals for the week and check off their lists. It’s a more pleasant experience for the customer too.”

Warwick’s will do local home deliveries up to a five mile radius – but their business is all over Ireland, England, Scotland and Wales – via couriers.

“The delivery service via courier has really taken off. People want their veg roll, potato bread, sodas, pasties and so on as well as all the regular meats. You’d be amazed at how much goes to London. Although there’s a fee for delivery, this is offset when compared to London prices.

“It’s next day delivery – so the courier will collect at around 4pm and the customer will receive it next morning – nine times out of ten, it will arrive by 10am. There’s a quick turnaround. The product is kept chilled. We use eco-friendly boxes which are completely recyclable. Even the frozen gel packs can be re-used.”

Warwick’s has also teamed up with Local Box, supplying all of their meat. Local Box is a company that supplies high quality local food boxes – like a personal shopper to order for all the local high quality foods – from the butchers, the greengrocers and so on. 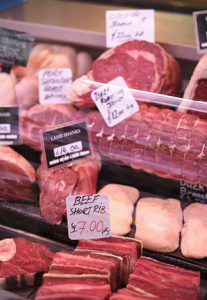 The courier and home delivery services have enabled Warwick’s to beat the battle for convenience. “The multiples are open at times we’re closed – but people want to buy our products that they can’t get anywhere else. We produce everything here from scratch – from the whole animal through to the end product. Our bacon won’t reduce to nothing in the pan. Nothing is brought in from a factory.”

It’s an artisan, traditional butchers – with everything made in-house. Mark continued “The focus is always on quality. There is no cutting corners to achieve the highest standards. It may be slow and time is money – for example the curing of bacon can take two weeks but there has to be a sacrifice and the difference is in the taste and quality. It’s open and honest product.” 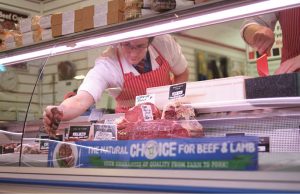 Warwick’s work with the best local suppliers. Mark mentions just a few – such as Richard and Leona Kane at Broighter Gold Rapeseed Oil which he describes as the best you can get, along with Abernethy Butter made the old way by Alison and Will Abernethy.

Vegetables come from a local grower too – as fresh as you can get. “The potatoes could be dug up by Robin on a Thursday and in the shop on the Friday” said Mark. That’s as good as it gets!

“We’ve been working with core suppliers for years such as Rockvale Poultry. Eric and Avril Thompson were one of our first suppliers and are with us to this day.

“All the bakery products come from French Village – from sweet treats to scones, potato and soda bread – and we only stock the best local cheeses and chutneys.

“It all goes hand in hand. Our suppliers have a similar ethos – the focus is always on quality. When people come to our shop, they know they will get the best that Northern Ireland has to offer.”