Killyclougher is a small village at the edge of Omagh in County Tyrone. Since the seventies it has grown and changed – with new housing developments springing up in the 1990’s, making it more of a commuter belt for the growing town of Omagh, while still providing a close-knit rural community for the population – now just over 3,000.

Kieran McGinn has been at the heart of business in Killyclougher all his life. With the Spar shop celebrating 50 years – and featuring a new deli and additional refurbishments, it’s now a far cry from the small local shop that became a Spar in 1971.

“The family had a small Cshop and pub in the village going back 65 years in fact” Kieran told NR. “In those days every small village had a pub, a shop, a church and a school – that was Killyclougher and we lived in the middle of it.” 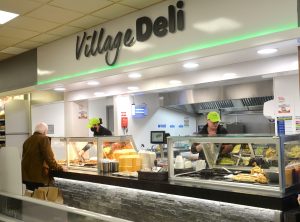 Born and bred in Killyclougher, you can tell that Kieran has an immense sense of pride and affection for the village and surrounds.

“We bought a small piece of land in 1994 to build a convenience store – now it has a hundred parking spaces. It has grown just as the community surrounding us has grown.

“The local shop and pub were always the soul of the village. We have been very lucky here in this part of Omagh. We’re right on the crossroads, and there has been lots of new developments and homes for families.

Known as the Village Store and the Village Inn at the outset, Kieran’s late father started the businesses. Originally as the manager of the Omagh Co-operative – his father then saw an opportunity to buy the pub and add on a small shop to the side.

As time moved on, Kieran became involved in the business when he was in his late teens – and over time, became involved in additional wholesale businesses – including North West Liquor, which he sold in 2006 to Paul Hunt of the Golf Group (also owners of Philip Russell).

In those days, as Kieran developed the Village Inn and shop, he took over two other licensed premises in and around Omagh – The Coach Inn and The Hog’s Head (now known as the Copper Tap). However, it’s the village shop that is always the ‘bread and butter’ business in the village, says Kieran.

Now, from 1971 to 2021, the Spar in Killyclougher is still at the heart of the community. Kieran is still very much involved in the business – although the day to day running is looked after by the store manager Seamus Furey.

“We’re delighted with the new deli,” said Kieran. “Over the years, trends have changed and now the big emphasis is on food-to-go. It’s become a very important part of our business – particularly with the younger clientele.

“People are much more conscious now of what they eat – there’s gluten free, sugar free, vegetarian and vegan. The deli really has become the heart of the store now too.”

As part of the 50th anniversary refurbishments, there’s a new meat counter, a Barista coffee counter, new bread and bakery, and a much wider range.

“The displays of sandwiches, wraps and salads look great. Then there’s Sliced – which is a range of ready meals below 400 calories. Combined it’s all added choice for our customers and is the backbone of the refurbishment.”

As the housing developments in the surrounding area continue to develop, the demand for a strong convenience store is higher than ever.

“We provide all the services expected such as the ATM and so on – but since the pandemic we have been a lot busier.

“People have started to realise just how much their local convenience store has to offer.”

As the Spar is such a vital aspect of community life, the store stayed open throughout the refurbishment.

“We would adjust around the ongoing work – closing a section at a time so the work could be done, sometimes even overnight. We closed the deli for a few days – to enable us to switch over to all the new equipment,” said Kieran.

Customers are incredibly loyal and they are delighted with their new look Spar.

“We’re coming out the other side of Covid and customers can now see that we offer so much fresh food and a better all-round offer. We were incredibly busy at the start of the pandemic – but we can’t be complacent. Our ready meals and kitchen range are as good a quality as you can get – restaurant quality.

“Our aim is to offer better service and choice to the consumer so that new customers and clientele keep coming back.”

With a background in the drinks trade, Kieran still has an off-licence adjacent to the Spar. In the one village complex, there’s a pub, off licence, car park, chip shop, pizzeria, launderette – and of course, the new-look Spar.

“Everything the local community needs is on their doorstep – including the school and the church,” said Kieran. “People now realise just how much they can shop locally – and it has brought a new sense of pride in to the community.” 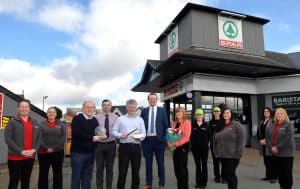 Half a century may have passed since the local village shop became a Spar.

The McGinn family were delighted when Henderson’s acknowledged this and presented them with a beautiful piece of cut glass to mark the half-centenary.

Kieran says that Northern Ireland really is now ahead of the came in the convenience store sector. “There is not a bad shop in the country,” he said, “when it comes to quality and ambience. We strive by buy locally wherever we can – our bread comes from the local Mullaghmore Bakery, our milk from the nearby Strathroy Diaries, meat supplied by the local butcher, bacon from Kennedy Bacon – many of our suppliers go back a long way with us and are good friends. As far as possible, it’s farm to fork.

“The emphasis really is on community – and Covid has brought that back into focus. Our customers appreciate how hard our staff worked through it all – doing home deliveries for older people. We seem to be coming near the end of all that now – and look forward to the ‘new normal’”.

It’s all about having the right mix said Kieran. “The right staff, ambience, the right price and quality – with excellent choice – all combine to make for a great Spar.”

Here’s to another fifty years! 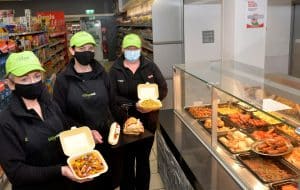 Almost 100,000 sign petition to bring back till staff at Tesco