In a market where innovation is key, Ground Espresso Bars’ director, Karen Gardiner reveals how this Northern Ireland coffee brand stays ahead of the competition.

When Neighbourhood Retailer speaks to Karen Gardiner – co-founder of Ground Espresso Bars – she has just opened her latest coffee shop in the prestigious Victoria Square complex that day.

Despite being in the midst of a high profile store opening, Gardiner comes across as friendly and relaxed, evidenced by the fact she reveals that the Victoria Square store is her 25th opening since the company’s humble beginnings in 2001.

After so many new stores, the opening is flawless, having assembled a team from experienced Ground Espresso Bars staff in the Belfast area. “We prefer to promote from within so we have been able to hit the ground running,” Gardiner says.

It is Gardiner herself who oversees all store openings, and a major part of her day-to-day role involves supervising drawings and plans whilst working with contractors. Careful thought goes into the location of each new shop and the area and target demographic is always examined closely. “We look at each site individually,” she says. “But you also have to rely on your gut instincts as well and think about whether it feels right. It’s not very scientific, but it has worked well for us so far!”

In a location such as Victoria Square, competition is plenty with a range of high profile coffee outlets already in the mall, including a Starbucks located next door. Ground Espresso Bars isn’t worried about the possibility of oversaturation, after all their point of difference is artisan, local coffee. “We wouldn’t have gone in here without considering the competition,” says Gardiner. “The amount of footfall to the centre is significant and there is enough to share around.”

And she isn’t wrong, when Neighbourhood Retailer visits the store it is a sunny day and the tables outside Ground Espresso Bars are filled with people wearing sunglasses and drinking a range of trendy coffees. By comparison, the store next door is empty.

A lot of Ground Espresso Bars’ good fortune has been the product of sharp instinct and the ability to move quickly and with innovation. The first Ground Espresso Bars store was opened in Coleraine by Gardiner and her husband Darren soon after they became parents. “I had an outside catering business, so I was already in the catering industry but when my first child came along I decided this wasn’t the life for me because it was long hours and weekends. I needed a business that was stationary and more or less nine to five.”

Now with a juggernaut of a coffee company, it is clear to see that this is not the restful job Gardiner originally imagined. “Talk about getting it wrong,” she laughs. But there were other reasons for opening Ground Espresso Bars too – including bringing a new style of coffee to Northern Ireland. Having travelled extensively, the couple noticed how coffee culture across the world differed to the coffee shops at home and were keen to bring back elements from countries such as Italy and America. 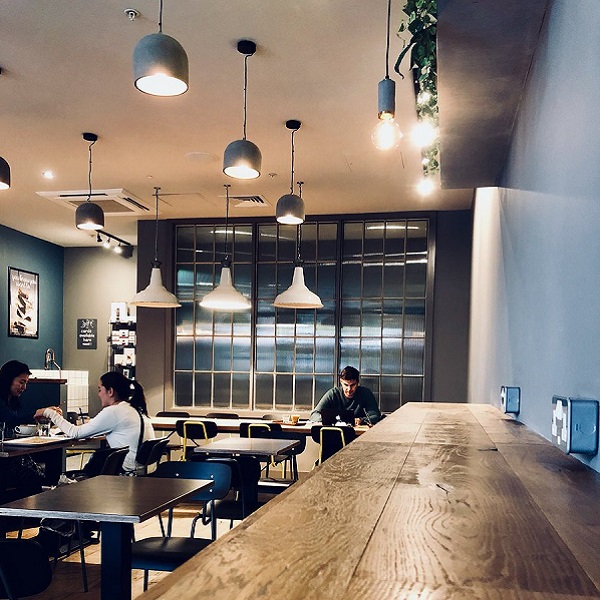 17 years later and the brand is still evolving.  “You learn with each store and we tweak each one as we go along. Every new store is a learning curve and it is important to realise that you don’t know everything and to be open to improving.

“We have a really good senior management team, with a regional manager and an operational supervisor who keep an eye on all the practical goings on, all the maintenance and that sort of thing. Our training and development manager makes sure that the staff are trained to an acceptable level. We have fortnightly routine audits of every store and our managers are key drivers behind those too. It’s about staying on top of those different elements constantly and making sure everybody is singing from the same hymn sheet.”

Consistency is important considering the range of locations Ground Espresso Bars can be found in – from the high street, to Next department stores, and most recently in partnership with forecourt giant Maxol. “The collaboration came from a conversation with senior management at Maxol and it was something we were unsure about in the beginning but we took a chance and it has paid off,” says Gardiner. “Maxol has been incredible to work with and it has turned out to be a great partnership. We’re hoping to see a lot more Ground Espresso Bars in Maxol forecourts now the first one has opened.”

Plans for further stores haven’t been finalised as yet, but as Gardiner remarks, “We don’t set plans in stone like that. As long as Maxol are happy, and we are happy, then we’ll just go with the flow.” There has been some talk of the potential to work with the fuel retailer in the Republic of Ireland, where the coffee outlet already has a presence as part of their Next franchise – another partnership which has been a success for Ground Espresso Bars. However, it is even further afield where Gardiner sees the business moving next with imminent plans to open two stores in Scotland before the end of the year. “We are looking to expand our horizons and grow outside of Northern Ireland,” says Gardiner. “It’s always important to be thinking of the next thing.” The first Ground Espresso Bars foray into Scotland will open in Kilmarnock in autumn with more to follow along the main arterial route between Glasgow and Edinburgh.

Solidifying a business with expansion is a wise move, as is preparing for a more sustainable future and in the last month Ground Espresso Bars has launched a new initiative which sees customers receive 50 pence off their hot beverage if they bring their own reusable cup. “For the past 17 years we have been driving company ethics, but it’s only now that we are seeing the general public taking a greater interest,” says Gardiner. “We have had our Keep Cups for years and have been trying to encourage the reusable brand for a long time but this is the first time we’ve been really able to back it with the possible government levy coming in. 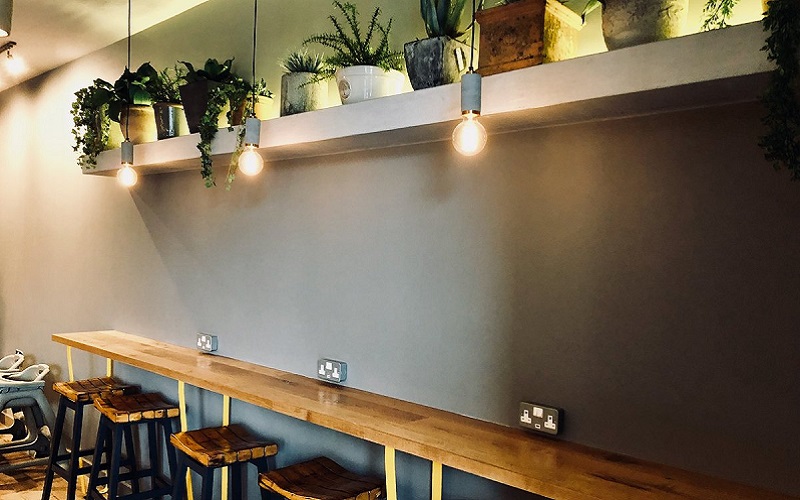 “We are working on getting this new scheme off to a really good start so that our customers receive discounts by supplying their own reusable cup. It has only just launched so it is too early to tell how well it is going but I’m expecting a huge surge in sales of our own Ground Espresso Bars’ cups.”

Although the scheme is still in the early stages, the brand has experienced positive feedback on their social media accounts – a tool which Ground Espresso Bars uses to their full advantage. “Being active online encourages customer loyalty and really allows us to show off our product especially on Instagram,” says Gardiner. Younger customers especially can be reached via attractive images on social media and following the latest trends is a huge part of that. For Ground Espresso Bars, trends differ in each location, from espresso-based drinks in the larger stores to artisan filter coffees in the more independent or “hipster” shops. With summer season on the horizon, cold tea is becoming increasingly popular, fitting the strong consumer preference for healthier products. However, Gardiner believes overall the drinks are getting shorter and stronger and Ground Espresso Bars plans to capture this consumer sentiment with the launch of their new beverage, the cortado, a short drink which is equal parts espresso and warm milk.

“We try to introduce new products when we can,” Gardiner concludes. “We are just trying to stay ahead of the curve, but also appeal to everyone and make sure that we are serving really good coffee because at the end of the day – that’s what it is all about.”