Greggs could be forced to reduce its range of baked goods due to supply chain issues and labour shortages, analysts say.

The high street baker warned that its costs are rising because trading has been hit by UK-wide labour shortages and disruptions to supplies caused by HGV driver shortages. The rising price of ingredients and supplies is also affecting the bottom line.

However, in a trading update, Greggs said it was confident about future trading and plans to accelerate its store openings to 150 a year as part of an ambitious target to double turnover over the next five years to around £2.4bn.

It said outlets have benefited from the August staycation, with like-for-like sales climbing by 3.5 % in the third quarter of the year, against the same period a year ago.

However Greggs says it has not been immune to supply chain pressures affecting the UK food and drink sector. It warned that it expects costs to climb over the next few months.

“Food input inflation pressures are also increasing; whilst we have short-term protection as a result of our forward buying positions, we expect costs to increase towards the end of 2021 and into 2022,” the company said.

Ross Hindle, analyst at Third Bridge, said: “From a pricing point of view, Greggs chose to pass on the chancellor’s VAT discount to their customers. They now face the tricky challenge of putting their prices back up when VAT increases to 12.5% at the end of September, and 20% in 2022.

“This may mean short-term margin pressure for the group especially in the face of rising inflation.

“Supply chain issues and labour shortages remain a key risk for Greggs with no end in sight. Temporary interruptions for some ingredients could result in the Group reducing its range and would hamper current momentum.” 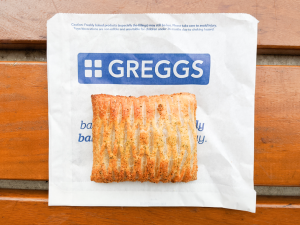 Greggs says it is a credit to its teams that the company has continued to trade well over the third quarter with two-year like-for-like sales in company-managed shops rising by 3.5 per cent when compared with the same period in 2019.

“Growth was particularly strong in August when a ‘staycation’ effect was evident and remained in positive territory in September, with two-year like-for-like growth of 3.0 per cent in the four weeks to 2 October,” it said.

“Delivery sales have continued to develop well, with 943 shops now involved in supplying customers through this channel.

“The broadening of our vegan-friendly food and drink options has been well received, notably the limited edition ‘Vegan Sausage, Bean & Cheeze Melt’ along with a ‘Vegan Ham & Cheeze Baguette’ and a vegan-friendly breakfast sausage.

“Pizza and savoury boxes are supporting the delivery channel and our autumn menu is now available in shops, featuring favourites such as pumpkin spiced latte and spooky bats and buns for Halloween.”

The company also said evening sales also present a significant opportunity and it hopes ultimately to expand two thirds of the estate into late trading.

“The introduction of delivery services has made many more of our shops viable in the early evening market and we believe that two thirds of our estate will ultimately be suitable for late trading (both walk-in and delivery),” the report said.