The latest market figures for grocery in Northern Ireland show an excellent increase of almost eight per cent across the last 52 weeks – but the latest available figures for the last 12 weeks show a sharp decline of just under 7%.

Symbols hold their own with continued strong performance – with 8.2% total market share – an overall increase in value terms of 14.2% on the same period two years ago.

“The Northern Irish grocery market grew by 7.9% in the 52 weeks to 16 May 2021. A shorter-term view paints a slightly different picture, however, as in the latest 12 weeks sales declined by 6.9%. The fall comes as we compare the market to the height of the first national lockdown in 2020, which saw record-breaking grocery spending in Northern Ireland” said Emer Healy, retail analyst at Kantar.

“As hospitality begins to open again, people no longer have to rely on the supermarkets for all of their meals and we have seen trips to the grocers fall by 1.7%. With drinking in the pub back on the cards, people also spent £14 million less on off-trade alcohol in the past 12 weeks compared with this time last year.

“Over the 52-week period, Tesco remained Northern Ireland’s biggest grocer. It held 35.5% of the market, grew by 8.6% and boosted its sales by an extra £102.6 million. The average basket size at Tesco jumped by 18.7%, equivalent to each person picking up nearly three extra items – the highest growth rate among all the retailers.

Sainsbury’s holds it own

“Sainsbury’s maintained its position as the second largest retailer, growing 6.7% and increasing its takings by £39 million as shoppers checked out with bigger baskets and made more frequent trips. Asda’s sales rose by 7.3% this period.

“Lidl’s growth reached an impressive 16.5% as it remained the fastest growing retailer. This was largely driven by consumers buying more per trip, helping it to add £34.5 million to its sales.” 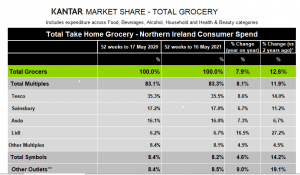