The battle against the illicit tobacco trade has stepped up of late with some serious action being taken against those found to be breaking the law. HMRC estimated that 2.5 billion illicit cigarettes and 3,500 tonnes of illicit hand-rolling tobacco were consumed in the UK in 2018-19, costing the government around £1.5bn in lost revenue.

Border Force NI had a significant success in recent weeks – 15.12 million cigarettes and 4.44 tonnes of tobacco were seized in two separate operations, due to Border Force vigilance.

If the smuggling attempts had not been detected, it would have cost the Treasury approximately £7.24 million in unpaid duty and VAT.

In the first operation Border Force officers detected 4.44 tonnes of tobacco that arrived into Northern Ireland from Germany. The container was shipped from Rotterdam to Belfast and was destined for an address in County Down.  Thirty six pallets within the load contained the tobacco which appeared to be Euro Bins Polyester. Markings on the pouches indicate the tobacco originated in Luxemburg.  The revenue and VAT evaded would have been approximately £1.44 million.

In the second operation, 15.12 million cigarettes were detected at Belfast Docks after two containers were examined after arriving from Vietnam via Rotterdam.  The containers appeared to be wooden furniture and were destined for an address in Belfast.  A couple of rows of cover load was used at the front, with the boxes of cigarettes behind. Each box contained 40,000 ‘Yett Virginia’ branded cigarettes. The revenue and VAT evaded would have been £5.8 million.

Both seizures were referred to HMRC for further investigation.

Justic Minister Naomi Long said: “Revenue and VAT evasion are not victimless crimes: this is the money we use to pay for our health service, education and infrastructure being stolen to fund all manner of illegal activity.

“I also urge people not to purchase such goods and play a part in disrupting organised criminality by reporting any suspicious activity to the PSNI. We all need to work together to prevent criminals profiting from their illegal activities, and to bring to justice those who continue to wreak havoc across our communities.”

John-Jo Oldham Assistant Director of Border Force NI said: “These seizures demonstrate our commitment in tackling cigarette and tobacco smuggling. Working with our Organised Crime Task Force partners we are determined to stop the illicit trade in tobacco products. This is not a victimless crime and is often linked with other criminality. Children and young people are key targets for those who peddle illegal tobacco and cigarettes, encouraging them to take up smoking and exposing them to crime.”

One benefit of the national and local lockdowns is that the illicit tobacco trade took a major hit leading to a rise in the legitimate side of the category. Retailers reported a growth in tobacco sales during 2020 due to the fact that the illicit trade wasn’t able to carry on in the same way it has done in previous years.

In the UK, authorities have stepped up their work in tackling illicit tobacco. Seven stores were recently closed in Thanet in England for illicit cigarette trading. Nine stores in Bolton were closed. Another retailer was sentenced to 260 hours of unpaid work. Alcohol licences were removed and hefty fines handed down to retailers for selling illicit tobacco.

The tiny minority of retailers tempted by this shortcut realise that selling illicit tobacco is a serious offence and carries severe punishments.

The Association of Convenience Stores has called on HMRC to look beyond retailers and investigate other locations where illicit tobacco could be sold although it remains to be seen if that call will be listened to. 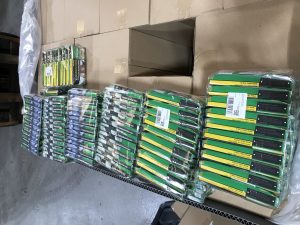 How big is the illicit tobacco trade in UK? Has this been affected by Covid-19?

The sale of illicit tobacco is a global industry. Between 2018-19, estimates show 8% cigarettes and 33% tobacco were non UK duty paid, meaning the Government lost £1.9bn in tobacco tax revenue . As such, since 2000, £47bn in tax revenue has been lost as a result of non UK duty paid cigarettes or tobacco being sold in the UK .

“Restrictions on travel due to Covid-19 have reduced the amount of tobacco purchased abroad for consumption in the UK. This, combined with the temporary closure of pubs and other hospitality venues during lockdown, which have traditionally been used as sales points for illicit tobacco, has all contributed to a decrease in sales of illicit tobacco. However, illicit tobacco trade remains a long term threat and we must remain vigilant at all times” said James.

“Illegal sellers tend to describe their stock as “cheap cigarettes” or “foreign” and often offer discounts for bulk buying.  Online, where counterfeit tobacco is a growing problem, illicit products are commonly sold as as ‘duty free stock bought in error’ to avoid detection. Similarly, they try to beat algorithms by putting a code word in front of ‘cigarettes for sale’ with the hope of throwing anyone policing online off.”

What impact does illicit tobacco trade have on legitimate tobacco?

“There is a misconception that buying “cheap cigarettes” is akin to a Robin Hood crime, but it is not. Most illicit tobacco sellers have links to other organised crime activities. At worst, the money raised from the sale of these “cheap cigarettes” has been known to go towards funding other illegal operations such as human trafficking, modern day slavery and terrorism. It’s important staff are educated on illicit tobacco so that, alongside the store owners, they too can be vigilant and notify the relevant authorities of any illegal trade in their area.”

What are tobacco suppliers doing to combat the illicit tobacco trade?

“It’s great to see news of recent seizures of illicit tobacco by Trading Standards. However, Trading Standards can only act on information regarding illicit tobacco trade when it’s reported to them. Recent figures show a staggering 78% of those who are aware of illicit tobacco being sold in the last 12 months haven’t reported it, with just 19% saying they did . We firmly believe that illicit tobacco trade must not be tolerated. It harms honest retailers and damages communities. However, to truly address the problem, we need everyone to be alert and take action by reporting any suspected illicit activity to the relevant authorities” explained James Hall.

“Imperial continues to assist in the reporting and investigation of these illegal activities wherever possible. Our dedicated anti-illicit trade app, SARA, launched in January 2018, has now received over 2400 reports of potential illegal trade activity which we have shared with law enforcement.

“We urge everyone to contact the appropriate authorities with concerns of illegal tobacco activity in their locality, to speak to their Imperial rep about SARA or phone Imperial Tobacco directly on 0800 0495992. For any retailers keen to find out more about illicit trade seizures and success stories, we’d also recommend following @suspect_report on Twitter.”

What can retailers do to help stop illicit tobacco trade?

“The sale of illicit tobacco is a criminal activity and therefore we encourage traders to act safely at all times. We’d recommend any traders do not take any action that might put them in any danger. All we ask is that if you suspect it, report it” he said.

JTI removes 46 gantries across UK due to illicit trading

jTI has removed tobacco gantries from three stores in the North West of England due to illicit tobacco sales.

The removal of JTI gantries from Moorgate News in Lancaster and Lucky News in Manchester came after both retailers were found to be selling illegal tobacco products.

In the case of Lucky News in Manchester, Manchester City Council Trading Standards Officers found 1,680 illegal cigarettes, with packs on sale for as little as £6.00.

JITS Super Shop in Stalybridge had its gantry removed by JTI after its licence was suspended in January by Members of Tameside’s licensing panel.

It followed an investigation by local police and HMRC, after reports the store was selling alcohol and ‘cigarettes for 50p each’ to schoolchildren in the local area.

Since 2017, JTI has removed 46 gantries across the UK and is calling on other companies supplying products and services to these stores to review their relationships with them and consider if they are the type of business they want to be associated with.

JTI’s fiscal & regulatory affairs manager Ian Howell said: “Illicit and underage tobacco sales are not victimless crimes and are both harmful for communities across the UK. We’re committed to supporting honest retailers through our Don’t Be Complicit in Illicit campaign and microsite, which features a host of useful articles and advice to combat the illegal trade, as well as our IDentify scheme, which aims to reduce the number of independent premises ‘at risk’ of selling tobacco, vaping and other nicotine products to minors.” 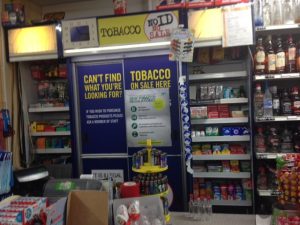