The toys are back in town: we profile Toytown founder Alan Simpson

It’s been a tricky 18 months for all retailers, but Toytown has pledged to deliver Christmas – and it won’t break that promise.

Despite the trials of repeated lockdowns and major supply chain problems, the UK-wide retailer imported a year’s worth of Christmas toys back in spring, circumventing the difficulties other retailers are now facing, founder Alan Simpson says.

The chain is going strong and even managed to open two new stores in 2021, one at the Gyle Centre in Edinburgh in July and another at Merryhill outside Birmingham, as soon as lockdown ended in May – their largest store to date.

“We normally want to open five in a year, but we pulled back this year because of stock shortages and issues. But we’re back looking at the possibility of opening five next year,” Alan says.

“We like to grow and keep growing – we may close a few from time to time. There’s no point in pushing water uphill and it’s part of the ducking and diving, knowing when to get in and when to get out.”

Now 66 and semi-retired, Alan says he’s now working five days a week instead of seven and is still chairman of the Toy Retailers Association of Great Britain and Ireland.

That store in the Gyle Centre brings the total number of Toytown stores to 33 – 10 in Northern Ireland, 10 in Scotland and 13 in England – making it the third largest independent chain of toy stores in the UK.

It’s a long way from its beginnings in a shop on the Castlereagh Road in Belfast early in the Troubles. 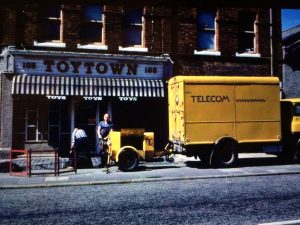 After leaving school, Alan started work as a salesman at Colman Foods, but the opportunity came up to buy a small toyshop on the Castlereagh Road.

“I thought let’s go for it and purchase it. We literally just took it one step at a time and added extra stores on,” he says.

“I started on the Castlereagh Road and I bought one in Comber which I later sold, then we opened one in Newtownards. We have concessions in Moore’s of Coleraine and the White House in Portrush, outlet centres in Banbridge and in Castleford and Salford, and stand alone stores in shopping centres and high streets.

“Ducking and diving has been a modus operandi over the years – it’s a family-owned business so we can react quickly. When some of the big conglomerates have to make a decision they have to run it past so many people and it takes weeks to make a decision, whereas we can decide in a split second. We’ve always ploughed our profits back into the business to enable expansion.

“We sell some nursery goods as well – we’re toy retailers with a nursery built on which trades as Babyworld. Some nursery retailers have a little bit of toy retail but we’re very much targeted at toys.”

The goal for Toytown, Alan says, is to put smiles on children’s faces.

“The UK toy industry is a very close-knit community – everyone knows everyone else in the industry right through and they are all friends. It’s probably unique in the UK.

“When we’ve done trade shows in Hong Kong or Germany, the other countries can’t understand how close the toy community are in the UK – they are competitors but not rivals as such.”

Many of the former big operators in the UK’s toy industry have dropped away over the years, he says, citing the likes of Toy R Us, Leisureworld in Belfast, Index and Easons.

“It’s like any other business – it’s survival of the fittest and you have to be able to adapt and move quickly,” Alan says.

The company attracts a lot of regular customers who will always drop in when they’re shopping in the likes of Abbey Centre, he says.

“We always have bargains on Black Friday, but we have bargains for 52 weeks of the year, such as half price bargains and deals on end of line. We have a great relationship with our suppliers because of our size and willingness to take volume – because of that relationship, they know that whatever quantities they have, we will take and it’s not going to put us off.”

With three sons in the business and nine grandchildren, there’s a ready-made feedback process in place. Alan says toys don’t change as much as you might think.

“Toys are cyclical – look at Barbie, look at Lego,” he says.

“You’ve got to keep developing them and keep them fresh, but as children grow up they become adults and they know what fun they had playing with the brand and they’re prone to look for that for their own children, so it keeps the cycle going.

“However, Lego as a toy has evolved over the years, and Barbie – they have electronic chips to enable the toys to do things that they couldn’t do 50 years ago.”

It’s now Alan’s youngest son who does the buying, with a colleague who has been with the business for years, he says.

“They have their own children and they are used to what children will like, but they will very quickly get feedback from the store if there is demand for ranges that we have chosen not to stock – if the demand is there, we can react and get moving quickly on that.

“A lot of the popular ranges are toys or games that are brought out on the back of something else – for example, Paw Patrol or Cocomelon this year come from TV shows. They’re all driven by TV and an affinity with children with specific brands that they will be happy playing with.”

Alan normally goes to Hong Kong twice a year to visit manufacturers’ showrooms, but he had just returned in January 2020 when the pandemic reached the UK and the stores all had to close.

“It was literally close in March and just sit tight. The government did an excellent job in supporting businesses through the difficult times, but there were several retailers like Topshop etc that closed – they were tied into leases that were punitive and therefore they weren’t going to survive,” he says.

“We were fortunate in the way we structure – our leases are based on turnover rents, so zero turnover meant zero rents too. We actually had our best year in 2020 and we’re having an absolutely stormer again this year. We’re already 28% up on last year and 10% up on the full year 2019.

“It’s like in any other scenario, when the going gets tough, the tough get going and they are the ones that can succeed and fight their way through and navigate all the different challenges.

“Whatever the problem, there is always a solution and you need to be able to realise you’re on the wrong track and have the ability to change.”

Alan says that while they had to close over lockdown, Toytown performed well when restrictions began to lift.

“It was simple – when we reopened there was a lot of pent-up demand. There was obviously cash in people’s pockets and children weren’t being taken away on holiday, so obviously they were being a little bit spoiled. We take whatever comes our way and say thank you!” he says.

Alan says Toytown is facing added costs as well due to wages.

“Our sales will not go up by 6% to keep pace, so that means profit margins will drop simply because of the wages budget.

“We employ 230 staff and we can only trim so much. The other difficulty for all businesses is finding decent employees. There is a bit of a scenario out there where I would feel that people are reluctant to go out to work – we’re short of staff and a number of other businesses are short of staff too.”

And there are also the supply chain issues that followed in the wake of the global shutdowns. While a grocery retailer might be able to switch to local suppliers when supply chain issues begin to bite, that’s not really an option in the toy sector, Alan says.

The Far East is where the toys come from and that hasn’t changed even with all the upheaval of the past two years.

“The majority of toys come from China – so that’s where we need to go,” he says. 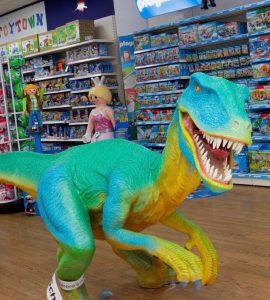 Alan’s last trip was back in January 2020, just before Covid reached our shores.

“We’ve had to do a lot from photographs and trust and dealing with suppliers that we know who know our business and know exactly what we will like and won’t like,” he says.

But the biggest problem since the pandemic outbreak has been getting the toys from there to here.  A lot of supplies that would normally have arrived in September have been subject to delays have a knock-on effect on getting the goods on the road and out to stores.

The disruption caused by Covid has resulted in a global shortage of shipping containers, and shipping companies have responded by hiking their prices.

Pre-pandemic, a shipping container would have cost around $2,000 but at times that rate has soared as high as $20,000, Alan says.

“That in itself makes price rises inevitable, and that’s one consequence that will filter into 2022 with the cost of living increase. It is what it is – if you want to ship goods, you have to pay the going rate.

“The long and the short is if you’re prepared to pay $20,000 that’s fine but at that point you have to look at it and the impact on the cost at retail would be unjustifiable. So you have to let it sit there and when prices become sensible, you bring it in then.”

However, if you’re shipping TVs or chairs, he says, you might be able to hold off until January or February in case shipping costs go down again – but toys are different.
“Santa comes at Christmas and the toy industry has this in common, that they have that date to work to,” he says.

Alan says Toytown was in a good position, however, to be able to fill up containers back in June when the price of shipping was much lower – and that means they will have plenty of stock this Christmas.

“We were able to load up with a year’s stock in May and be able to get a lot of stock in before some of those price rises began to take effect.”

Alan says Toytown has done well despite the challenges of the pandemic.

“We know what we’re about and we are good at what we do, and we just get on with it.”

For full feature in the latest issue of Neighbourhood Retailer, click HERE.

Supervalu and Centra pledge to plant 50,000 trees across NI

M&S calls for end to all NI border checks