Freedom from Fear -Northern Irish shopworkers speak out about violence, threats and abuse

Usdaw renews the call for a new protection of workers law.

Retail trade union Usdaw launched a Freedom from Fear campaign, with shocking statistics from their annual survey. Preliminary results from nearly 2,000 retail staff across the UK show that in the last twelve months:

Northern Irish voices from the frontline

These are some of the comments Northern Irish shopworkers shared when responding to Usdaw’s survey:

“People throwing things at me, being abusive about waiting times and about not wearing masks.”

“I have been called names and sexually harassed.”

“Physically slapped by a customer, spat at and had groceries thrown at me.”

“High volumes of verbal abuse when either following the Think 25 policy or refusing to serve an individual alcohol who is already under the influence.”

“Screamed at for not having stock. Basket thrown at me because we didn’t have the ready meal he wanted. Threatened to wait on me outside the store when I finished because she was unable to get a refund.”

Paddy Lillis – Usdaw General Secretary says: “It is heart-breaking to hear these testimonies from Northern Irish shopworkers who deserve far more respect than they receive. Our latest survey results clearly show the scale of the appalling violence, threats and abuse faced by shopworkers and demonstrate the need for a ‘protection of shopworkers’ law.

“It has been a terrible year for our members, with over 90% of shopworkers suffering abuse, more than two-thirds threatened and one in seven assaulted. We are saying loud and clear that enough is enough, abuse should never be part of the job. At a time when we should all be working together to get through this crisis, it is a disgrace that staff working to keep food on the shelves and the shop safe for customers are being abused. Action to protect shop workers is needed.

“Today a new protection of shopworkers law comes into force in Scotland, but we are deeply disappointed that the UK Government has continued to resist a similar measure in England, Wales and Northern Ireland. Retail staff across the UK have a crucial role in our communities and that role must be valued and respected, they deserve the protection of the law.

“This is a hugely important issue for our members. They are deeply concerned that the current high levels of abuse will become the norm, unless the Government takes urgent and meaningful action. Shopworkers are saying loud and clear that enough is enough. The Government has promised to bring forward an amendment to their flagship policing bill in the House of Lords and we urge them to keep their word.”

“During lockdown, Retail workers put their own health at risk to ensure people could buy food and other essential items. It is shameful that so many staff have been the victim of verbal and physical abuse by customers over the last 12 months”

A former police officer who was the victim of an attack in his shop has praised a landmark new law offering shop workers greater protection.

Hussan Lal, 59, was kicked in the chest when he confronted six men barging into his food shop.

At the Scottish Parliament he recently said thanks to Daniel Johnson, a Labour MSP and former retailer, who brought in a Private Members Bill to offer retailers more protection against crime.

Mr Lal, representing the Federation of Independent Retailers (NFRN), also paid tribute to other parties including Ash Denham, Minister for Community Safety in the Scottish Government, who agreed to turn the bill into a law which came into force at the end of August. 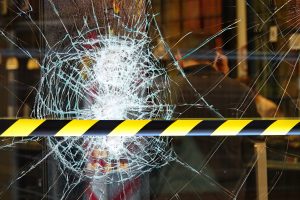 The new legislation takes effect at a time when research from the British Retail Consortium revealed that in 2020, there were 424 incidents of violence and abuse every day. Meanwhile, an Usdaw survey found that in 2020 and out of 2,729 shopworkers surveyed, 88 per cent had experienced verbal abuse, 60 per cent had been threatened by customers and 8 per cent were assaulted.

Mr Lal said: “I was proud to serve Queen and country before moving into retail. But it is not easy. Instead of charging people I am attacked and many other retailers are too. It is horrendous.

“We are grateful to Mr Johnson and other parties including Ash Denham, the Minister for Community Safety, for making this new law come about. We now have something to charge culprits with.

“But we now need the police to enforce it. I don’t criticise the police because I know where they’re coming from . I know what limited resources they have and the wide range of duties they now have. However their first duty is to protect the public.

“I had to ask six men to leave when they barged into my shop in breach of the rules that face coverings should be worn and no more than two people can be inside at a time. It was six people against one. As I was phoning the police one was kicking me in the chest. I didn’t know where it would end – if one of them would pull a knife.

“Police need to send someone out promptly otherwise retailers don’t feel protected and criminals are encouraged to attack again. We are assaulted and racially abused.

“We need the police and public to understand that these incidents are not minor and covid is not the main cause. Aggression predates this” Mr Lal, immediate past Scottish President in the NFRN, now runs St Mirren Food Store in Love St, Paisley.

The NFRN will continue to campaign for effective legal protection for shop workers  across the rest of the UK in the face of rising levels of abuse and violence.

NFRN National President Stuart Reddish said: “I get calls from hundreds of retailers

who are crime victims. The impact of retail crime can be devastating and longlasting – not just in terms of physical injuries but on anxiety and stress too. The government has to act and tackle retail crime once and for all so everyone working in shops have confidence in their workplace and that should a crime incident occur  they will receive the response and protection.” 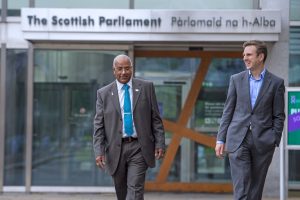 Independent retailers praise new law giving them greater protection against crime
A former police officer who was the victim of an attack in his shop has praised a landmark new law offering shop workers greater protection.
Hussan Lal, 59, was kicked in the chest when he confronted six men barging into his food shop.
Mr Lai visited the Scottish Parliament today to personally thank Daniel Johnson, a Labour MSP and former retailer, who brought in a Private Members Bill to offer retailers more protection against crime.