The doors of Greenway 9 were only open for a couple of weeks when the world went in to lock down. Megan Hamilton and her partner Jonathan McGreevy had just given up their secure jobs to turn their dream of a deli and sandwich shop into reality – when the nightmare that was Covid came crashing down.

“We opened on 2nd of March 2019, then had to close on the 28th. It was quite difficult – we had young children at home, a brand new business and had to immediately close down for six weeks” explained Megan.

Despite the difficult beginning – Greenway 9 has bounced back and is literally going beyond all of the couple’s initial expectations – including being a finalist in both the Northern Ireland and all-Ireland Takeaway Awards.

“My partner is a chef by trade and has helped out enormously. He knew I always had this dream of opening my own deli and sandwich shop, and encouraged me to go for it” said Megan who has literally worked in each and every shop on the block in the heart of the Cregagh Estate since she was thirteen. 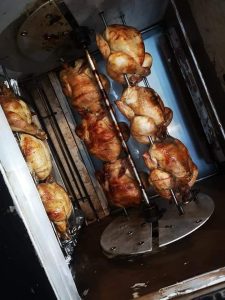 Now, she is her own boss with her own thriving business.

“Over the years, I have worked in Hamilton News next door, the Spar, the chippy and the fruit and veg shop – so it’s home from home here. I know just about everyone in the local community and they have been so supportive since I opened up again. Thankfully, after those six weeks when we had to close, we were able to open up again as a takeaway.”

Megan says Cregagh really is a good estate – with a strong sense of community. The unit she took over had been a butcher’s shop so it already had a cool counter in place. Her experience working in the chip shop and her partner’s experience as a chef meant she knew exactly what needed to be done in terms of food safety, hygiene and all the requirements of opening up a food-to-go business. 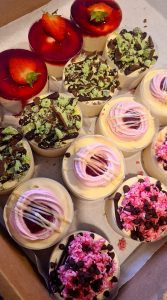 “We are both big ‘foodies’. We wanted the focus to be on quality but it was also important that we could offer good value. Our salad boxes mean customers can fill up on healthy food for just £3.30, or get a healthy soup and sandwich combo.

“It’s a great location for us – not just for people from the local estate, but there’s also Castlereagh College nearby, a business community, a bus stop outside and passing trade.”

Greenway 9 is open for breakfast, toasties, sausages and bacon baps – with Belfast baps being particularly popular. There are options for all palates – including vegan and vegetarian.

“Our potato salad is particularly special, as a re the soups and veggie options. All our sauces are gluten free. We have flatbreads, panini, toasties, white and granary – and of course the famous Belfast Baps. Our lunchtime special of soup, stew, bap and a drink for just £6.25 goes down well with customers. It’s quality product – but at a value price,” explained Megan.

“Everything is made from scratch. One thing we weren’t going to compromise on was our chicken – it’s all cooked from scratch here.” 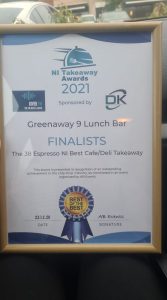 When Megan found out that Greenway 9 had been nominated for the NI Takeaway Awards she was speechless – then she got a call to say that Greenway 9 had reached the final seven. The Awards were scheduled for June 21st but have had to be postponed – so we’ll just have to wait and see.

“Then, I couldn’t quite believe it when I got another call to say that we were also nominated for the all-Ireland takeaway awards sponsored by Yes Chef. Being shortlisted like this has been so encouraging and boosted our confidence.” 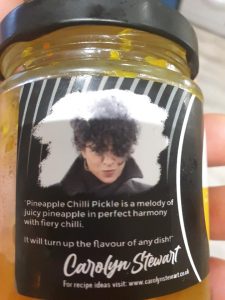 “Caroline Stewart’s Pineapple and Chilli Chutney and Caribbean and Pickle Jam have quickly become firm favourites here. In fact, we like to support other local businesses and suppliers wherever possible. All our bread comes from French Village – their bakery is close by on the Montgomery Road.”

Ironically, last summer, it was the ‘eat out to help out’ scheme that impacted on the business – with people eating elsewhere for half price, but when the scheme ended – business at Greenway was back on track better than ever.

“It was crazy all through Christmas. The church was doing Christmas dinners – three courses for just £8.50 or two for £15 if shielding so we helped out with sandwich fillings and so on. We are very close to our local community and will stay that way. Other local businesses all try to support each other and help out – even the local churches are helping out with deliveries and so on.”

“That’s our address,” laughed Megan. “9 Greenway, so it just made sense.” 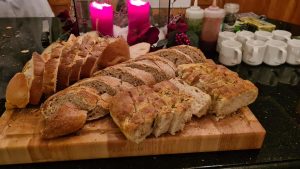 Freedom from Fear -Northern Irish shopworkers speak out about violence, threats and abuse

Winter is coming… Convenience Retailers Have Winter All Wrapped Up

Sweet Dreams are made of this… NR’s annual confectionery feature

Deli with a Difference – Indie Füde is a deli, but not like any other…